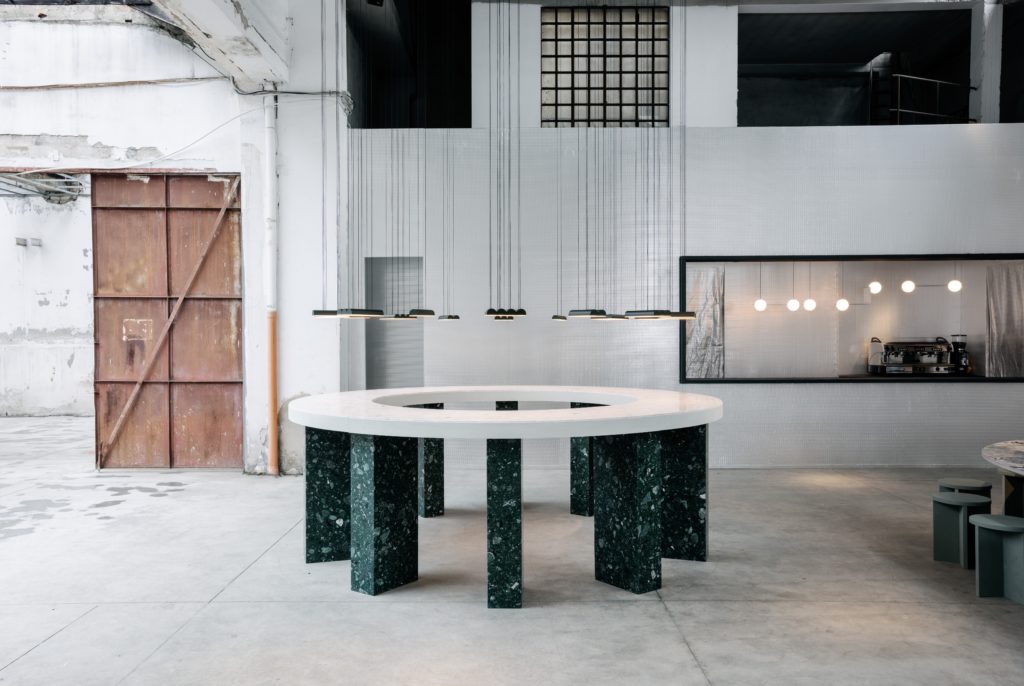 A pop-up cafe for Fuorisalone 2019 during the Milan Design Week has caught much attention in the design world for its unique style and setup. Its name is Caffè Populaire. Opening for only six days, the pop-up was created by Milanese DWA Design Studio and Canadian lighting manufacturer Lambert & Fils: The duo wanted to host a space defined by hospitality.

“It was a site that would act as a sanctuary during the hustle of Milan Design Week,” explained Frederik De Wachter, co-founder and interior designer of DWA Design Studio, “Theconcept cafe brought people and design into dynamic encounters through the essentiality of food, transforming the industrial backdrop of an ex-panettone factory in the suggestive location of Alcova Popoli Uniti into a cafe.”

A Multisensory and Conceptual Artwork

Filled with installations created by talents across the globe, the factory was turned into a space that ignited inspirations and the senses of diners. “The intention was to invite people to gather around a common table to share food and ideas, re-imagining the original industrial space as a multisensory and conceptual container,” explained De Wachter. 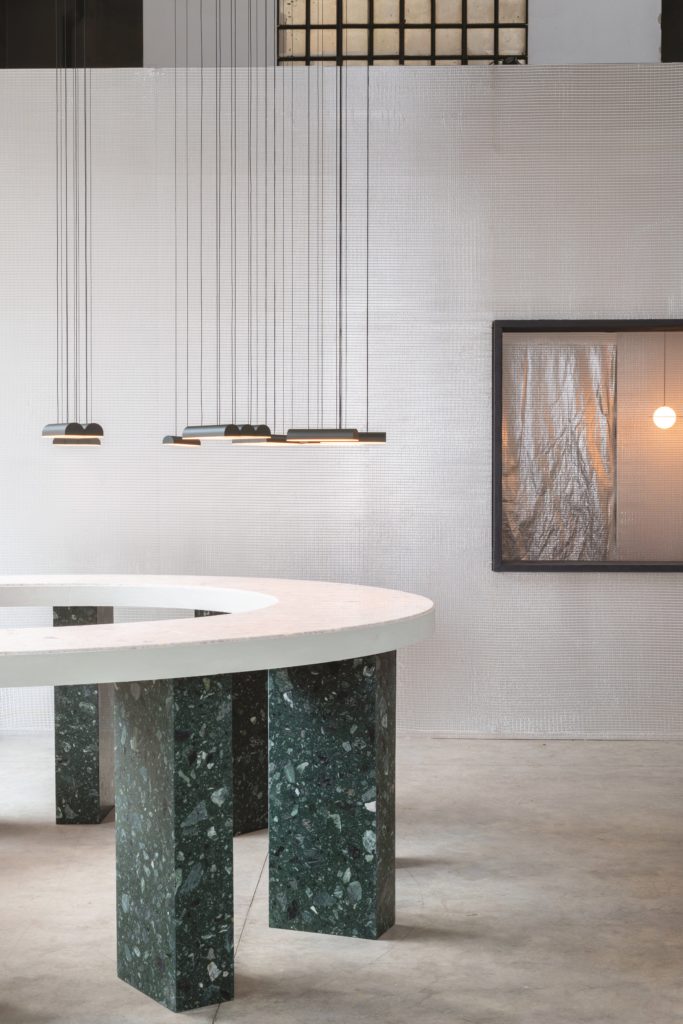 However, the table is not “common” at all. The U-shaped dining table is a customized piece by the studio, made from pre-cast slabs of Silipo l fragments. According to De Wachter, the inspiration was from a painting of a dinner at a U-form table dated back to the 18th century. The table was produced by Italian manufacturer Mariotti Fulget. So was the circular bar beside the table.

If you looked up to appreciate the lofty rooms, you would catch sight of two different kinds of lighting. Designed by Lambert & Fils, Hutchison is the lamp collection composed of an aluminum base. The long suspension wires extending down from the ceiling make you sense the height of the space. The wire is made from waxed cotton, which contrasts to its dense horizontal base. The other collection, Sainte, is an exploration of the forces that anchor us. The suspension light shows a dialogue with gravity: The rectangle glasses are in layers and different colors, supported by black nylon straps. The contrast in color and materials reveals more about the concept — Power. The lamp is like an artwork floating in the space. Both collections were displayed for the first time at the cafe.

De Wachter attributed the project to “the outcome of a strong and participative work of collaboration and dialogue between design realities from all around the world”. It’s more than true. The meals at Caffè Populaire were served on a collection designed by Noé Duchaufour-Lawrance for Revol, the 250-year-old French porcelain maker. The table base and chairs were swathed in muted green by Antoine — Architectural Finishes, who also created the large plaster backdrop and a dramatic red nook with tactile walls. Small decorating pieces on the table were from Mercury Bureau, a collaboration with Toronto florist Flur.

What DWA and its partner companies have created for Caffè Populaire not only appeals to visitors’ eyes but also incites curiosity and conversation. “We filled the rooms of the factory with dramatic forms and volumes, creating a conversation of opposites — raw and refined, past and present, existing and contemporary, an immersive scenography for visitors, layering textures, light, furniture, objects and food,” said De Wachter. He’s right! Lucky diners also had ALMA, a special shaped pasta available at the cafe designed by Chiara Andreatti for Casalinghe di Tokyo, which was regarded as the sexiest thing you could have for supper. Collaboration always comes with challenge: How to speak in a coherent design language for a pop-up cafe. To re-design the interior of the factory and give it a new life with reflection of the past was not an easy goal to achieve. “The choice has been designing a new ensemble of monolithic gestures that together with the industrial fascinating background became perfect scenography for new contemporary lighting collections,” De Wachter told CTI. Something old, and something new.

Luckily, De Wachter shares the same idea with Samuel Lambert, founder of Lambert & Fils, that design cannot exist without dialogue. He said, “Caffè Populaire succeeded to turn our shared values into a collaboration to create down to earth, generous human encounters, a harmonious gathering of material, people, and space.” Great minds think alike while trust also plays an important role as both of them trusted each other in their respective realm. 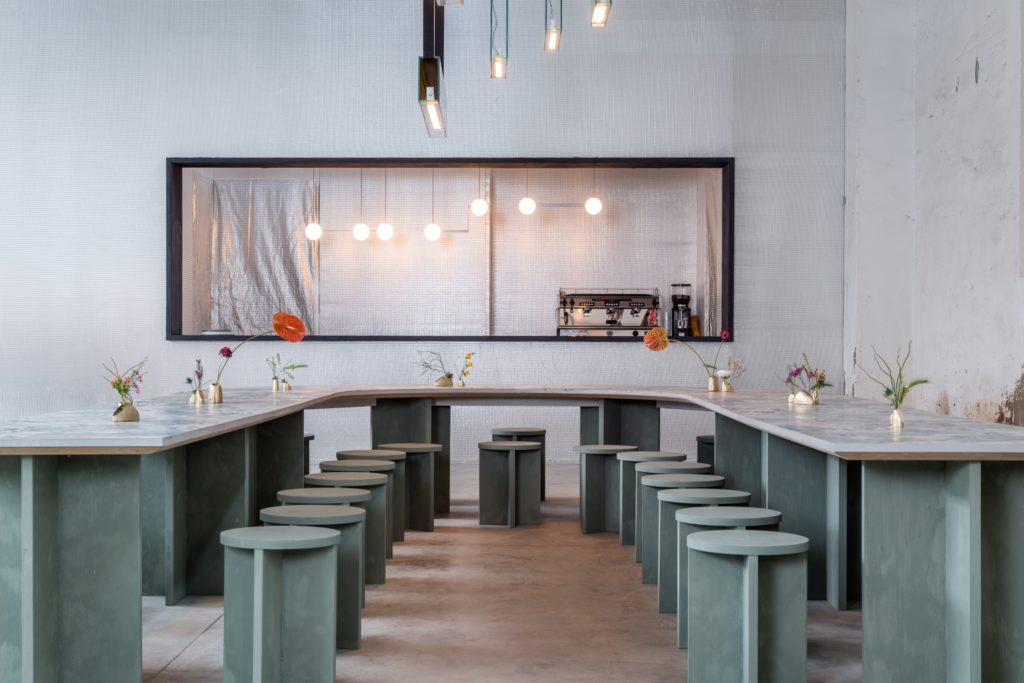 The cafe is successful and peculiar, effectively creating an environment of potentials, activated by those who inhabit it. People who dined at Caffè Populaire were encouraged to put down the phone and enjoy food and talks with friends. “This is not an Instagram wall, or photo-booth,” the project text reads, “Because after all, food is the oldest way to socialize and to host is to celebrate.”

As a multidisciplinary company, DWA believes in the value of creation and applies it to big and small things, complying the creative process to the many ways of living. “From the privacy of an apartment to the convivial atmosphere of a hotel, from the suggestions of a shop window to the conception of site-specific events, we give identity to each project elaborating it carefully from concept to completion,” shared De Wachter. Established in 2005, DWA has worked for a number of clients. Birrificio Italiano is one of them. The handcrafted beer shop, founded in 1994, has been one of the most successful breweries worldwide. Its new face-lift, completed in 2017, creates a contemporary yet warm atmosphere for this brewery. As you enter the shop, your attention will be drawn to its 1930s original Milanese terrazzo floor while the bar counter seems to be more welcoming than ever. The height of the bar is lowered intentionally in a bid to encourage conversations between guests and bartenders. The barrier thus vanishes. The lights and two big red neon chandeliers showing the names of the beers available at the shop warm the whole space, making people feel cozy and comfortable. Such settings also evoke beer colors.

Every single detail at Birrificio Italiano is carefully chosen to give the old place a modern twist. “Our design philosophy is to always combine creativity with research, investigating forms and materials in search of new answers,” said De Wachter. 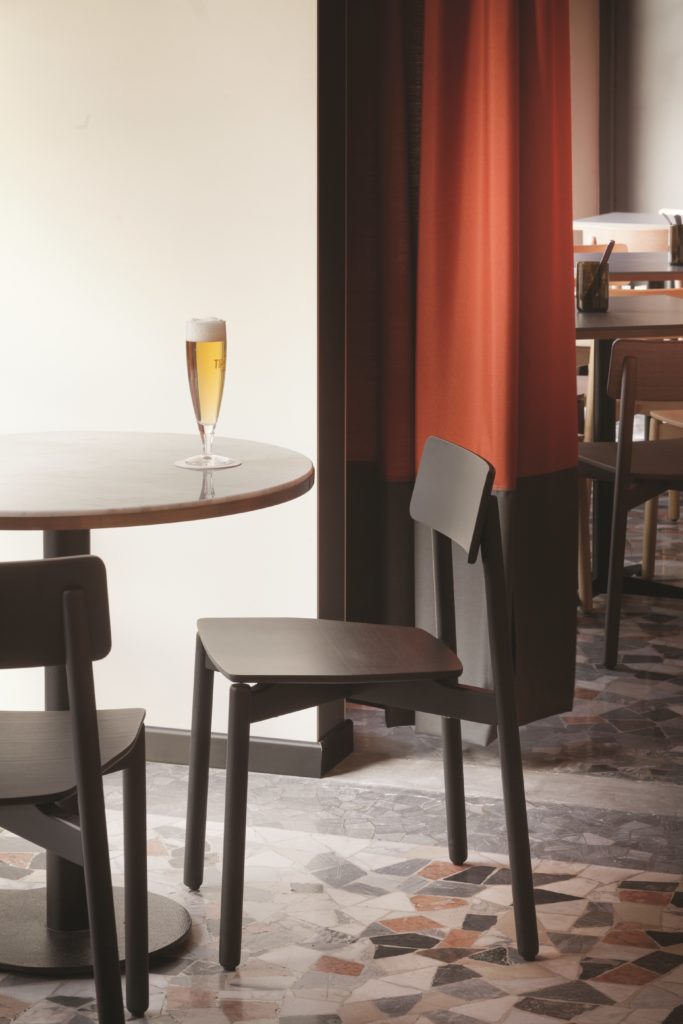 With special love to “juxtapose high and low, simple and complex, pure geometries and details that embellish them”, DWA focuses on design, the heart of their work, which originates from a common horizon and a continuous dialogue between different inspirations.

“When we design something, I always ask myself if I would design it for myself.” De Wachter thinks Italy is experiencing a return of color when it comes to design trend, which makes him recall the studio’s project Hotel Giulia, which was completed together with Patricia Urquiola. “Also, there is a trend of rethinking the past and tradition,” he suggested.

At the moment, De Wachter and his team are working on a big interior project in France. In October, the studio will move into a new place to continue inspiring the world through their design works. If you plan to visit the upcoming Salone del Mobile 2020, you may encounter DWA’s innovative designs. 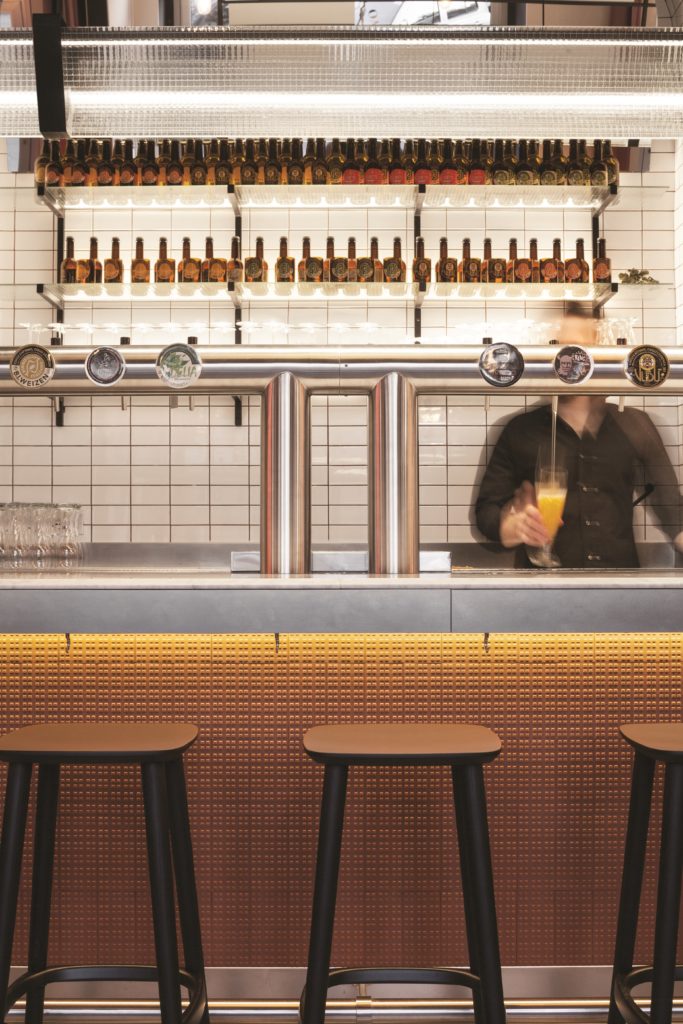 Frederik De Wachter – In Milan, you definitely need to visit Fondazione Prada, offering – beside the greatest building in Milan – wonderful exhibitions, great movie projections and an excellent bar and restaurant. As a designer, I think you need to know the history of a place; so I would recommend a visit to the renaissance churches in Milan: Santa Maria delle Grazie and San Satiro by Bramante and Capella Portinari. A small gem not to be missed by designers is the studio of the famous designer Achille Castiglioni in Piazza Castello. Visiting this space makes you understand much more of the mind of this genius.

DWA was established in 2005 in Milan, co-founded by Frederik De Wachter and Alberto Artesani. They design private and public spaces in which to live, relax and share as well as concept stores and shop windows to enshrine or enhance items and precious accessories. They create sets, installations and site-specific works for temporary exhibitions and events in the field of fashion, luxury and design. www.dw-a.it

Frederik De Wachter and Alberto Artesani met in Milan after years of experience in renowned studios in Barcelona, Milan and Antwerp. DWA was born from their shared vision and the interweaving of their different sensitivities. Feya: A Cafe for a Maximalist Feel 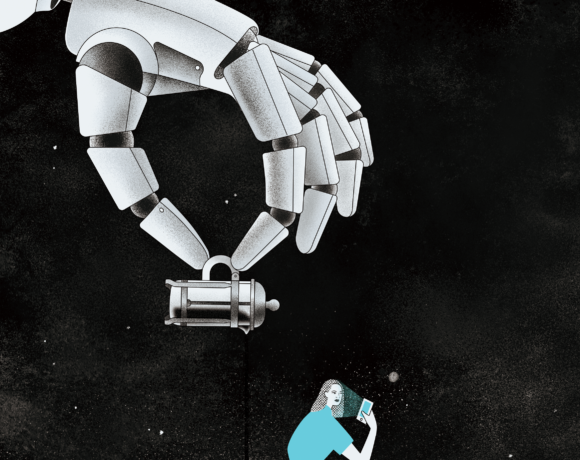 Think out of Cafe

Needmore: Magicians behind the Screen