Keith Loh: Stand out to Surviv.. 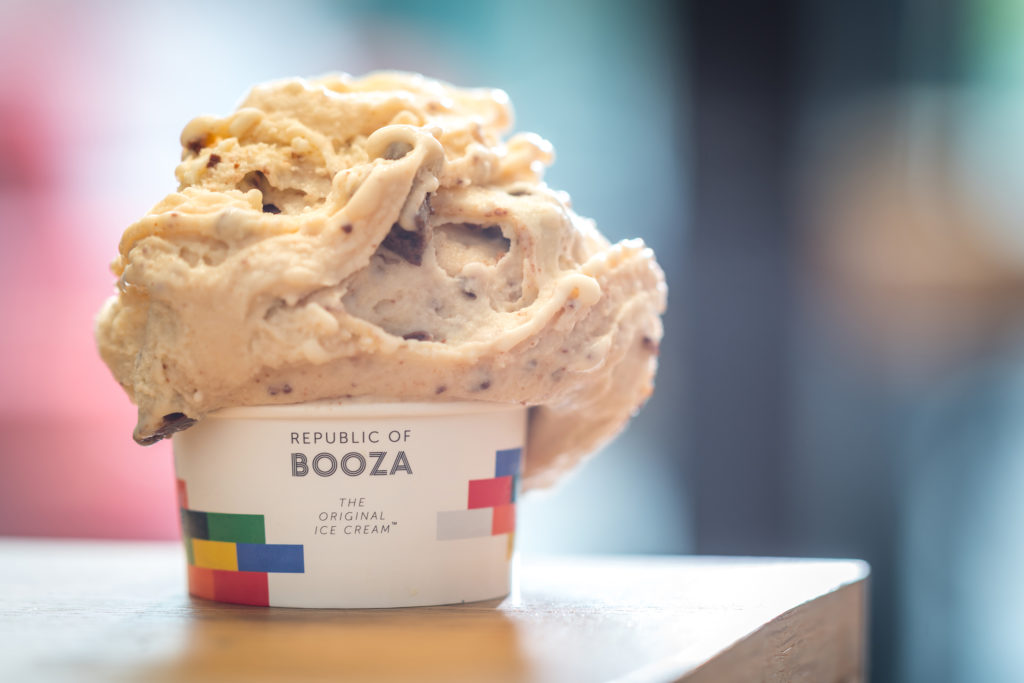 Ice cream parlor Republic of Booza just opened its second store in early July! Since its debut in Brooklyn, New York in 2018, it has taken the town by storm and become Instagram famous in a single year. As the world’s first modern booza brand, Republic of Booza stands out from other ice creams by recreating the authentic, stretchy booza ice cream in a variety of bold, contemporary flavors. Try these: Horchata de Chufa is based on a refreshing milky drink originated from Spain made from tiger nuts; Mango-Tajín is a mango sorbet seasoned with a tangy and spicy Mexican condiment; Sichuan White Chocolate will leave a tingling sensation on your tongue but without spiciness. The Republic is mentioned by fashion magazine Vogue in its “Top 10 Food Trends for 2019” on account of its unusual flavors.

Now, you might be excited and crave for a bite, but hold on a second or maybe longer: The staff would use a three-foot-long wooden pestle to pound the ice cream and stretch it with his hands like pulling Lanzhou noodles until the mixture has its best texture, and then you will get the stretchy scoop. Wait, what is this “irregular” ice cream indeed? 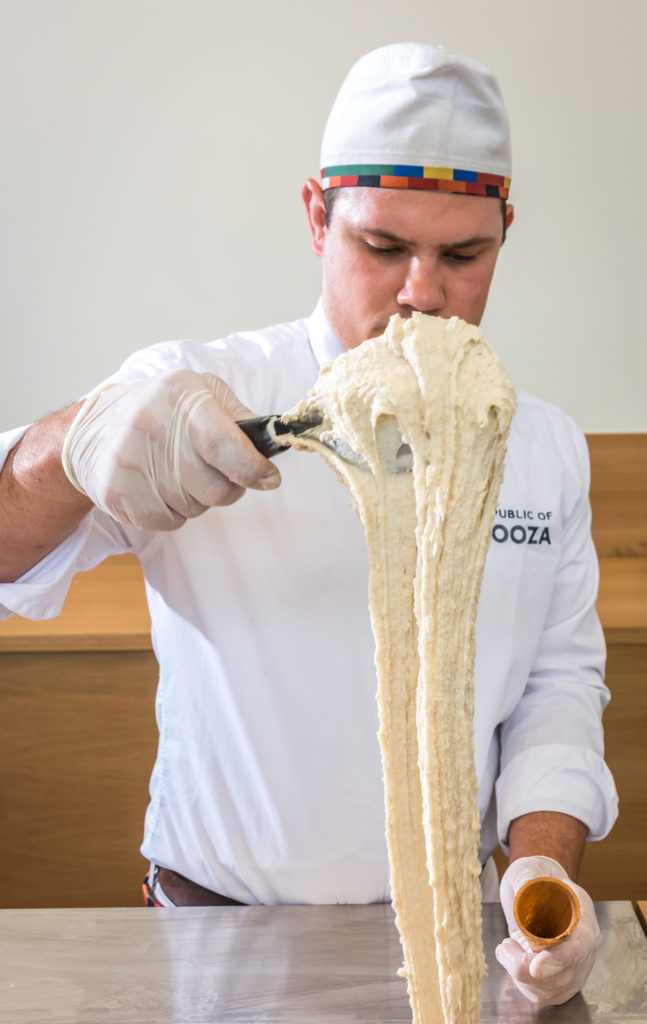 If you are asked to tell the different types of ice creams today, you probably could identify American hard ice cream, Italian gelato, sorbet, and soft serves. Booza, however, is not one of them, especially if you’ve been to the Middle East. Booza is originated in the Levant region of the Eastern Mediterranean with a history spanning five centuries. It is a form of elastic- and taffy-like frozen dessert, distinguishing itself from other ice cream varieties by its stretchy consistency. When you dip your spoon in the booza and pull out gently, you will find yourself pulling out a string of ice cream which you can twirl and wind around the spoon. Sounds familiar? Yes, like pulling a mozzarella-spread pizza! Literally speaking, booza deserves the name of “yoga queen” in the ice cream world.

The stretchy ice cream has a different name by region. Booza is called “maraş dondurma” in Turkish, which is likewise stretchy. Its soft and elastic texture makes it smoother and denser than other forms of ice cream. Traditionally, buying dondurma from local vendors is as much fun as chewing it. The cunning sellers tend to trick customers by serving the dondurma cone on a long-handled stick and then passing the ice cream from cone to cone before eventually giving it to the “angry” customer who tries eagerly and fails to grab it. 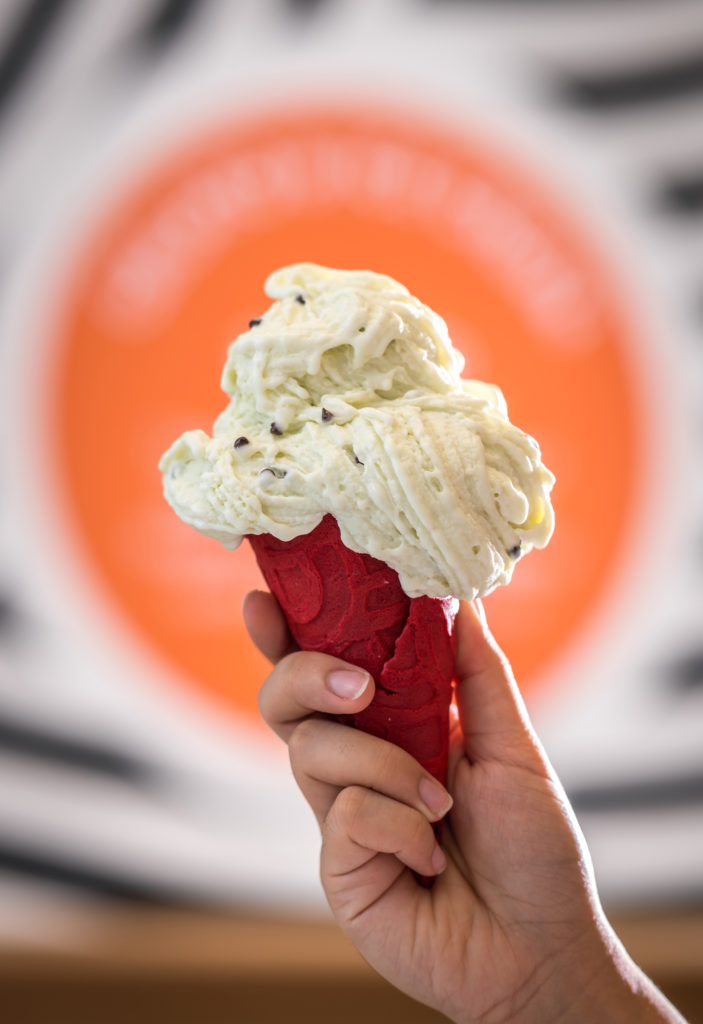 Secrets Behind the Stretchy Texture

The distinctive consistency of stretchy ice cream can be attributed to two factors, its ancient and local ingredients, and a particular production technique.

Salep (or sahlab) and mastic are the two ingredients that contribute to the signature stretchy texture. Salep, a starch made from orchid root, contains a mucilaginous carbohydrate named glucomannan which orchids use to retain water during dry seasons. In other words, it plays a thickening and flavoring “role” during ice cream making. When dissolved in milk, the glucomannan chains bind up and block the movement of water molecules, accordingly making the milk viscous. Mastic, is an aromatic resin obtained from the mastic tree in Greece, which means it is responsible for the chewiness in the ice cream. Thanks to salep and mastic, they give the ice cream a natural gravitational “pull” like a yogi. More importantly, they make the ice cream melt much slower – this might surprise many people, which allows it to be served at a temperature that brings out the full intensity and complexity of flavor.

Instead of being churned like most ice creams, the stretchy ice cream base is pounded with a large and long wooden mallet and then pulled by hand in order to crowd out the air and activate all the ingredients, till it achieves a dense, elastic and creamy texture. As mysteries are often bound up to ancient histories, the pounding time and skills which define its signature consistency remain the key and secret of the stretchy ice cream.

The ancient Eastern Mediterranean ice cream is not a fuddy-duddy. It has made its way to the modern ice cream world with new forms, taking off around the globe for a new life. 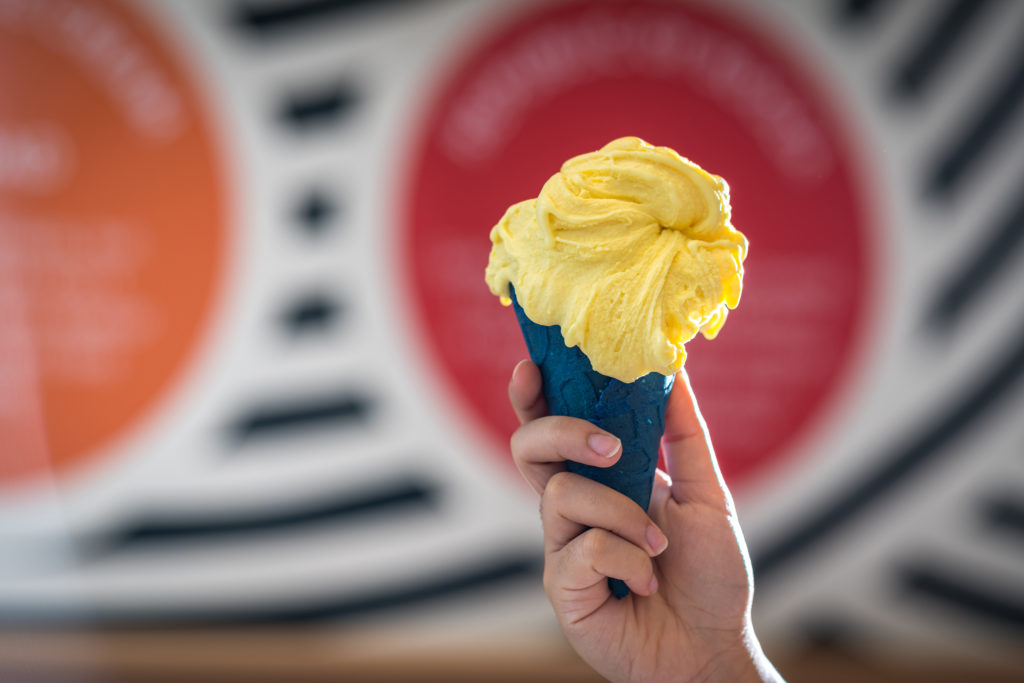 “Hidden gem” seeker and innovator Republic of Booza is definitely an “it girl” in the modern booza world. “Historically, booza has only been available in one traditional flavor, known as Qashta or ‘Candied Cream.’ Republic of Booza is the first to tap into booza’s full potential as a vehicle for flavor, using it to explore a variety of tastes from all over the world,” says Michael Sadler, co-founder of Republic of Booza.

They serve 17 flavors under three categories on the menu, Classic, Global, and Experimental. The Classic section is more localized catering to American taste, you’ll find classics like Vanilla and Pistachio. The Global section shows respect to traditions of different regions, such as original Qashta and Horchta de Chufa, which are compel- ling to taste. For others, as introduced by Sadler, they add a little “twist” in the flavors which become Experimental, such as Sour Cherry Mahlab, Raspberry EVOO, and Watermelon-Feta Sorbet. Normally, the shop rotates flavors every 2-4 weeks, which means there is always something new on the menu for consumers to discover.

Since early this year, Republic of Booza has made a dramatic move and been working on turning Brooklyn’s top restaurants into their ice cream flavors. Sometimes they choose a signature product of the restaurant to invent a booza flavor. Imagine pancakes in ice cream! According to the co-founder, they added Clinton Street Baking Company’s blueberry pan- cakes, whole berries, and maple butter to the cream base and made them into a culinarily modern and appealing booza. 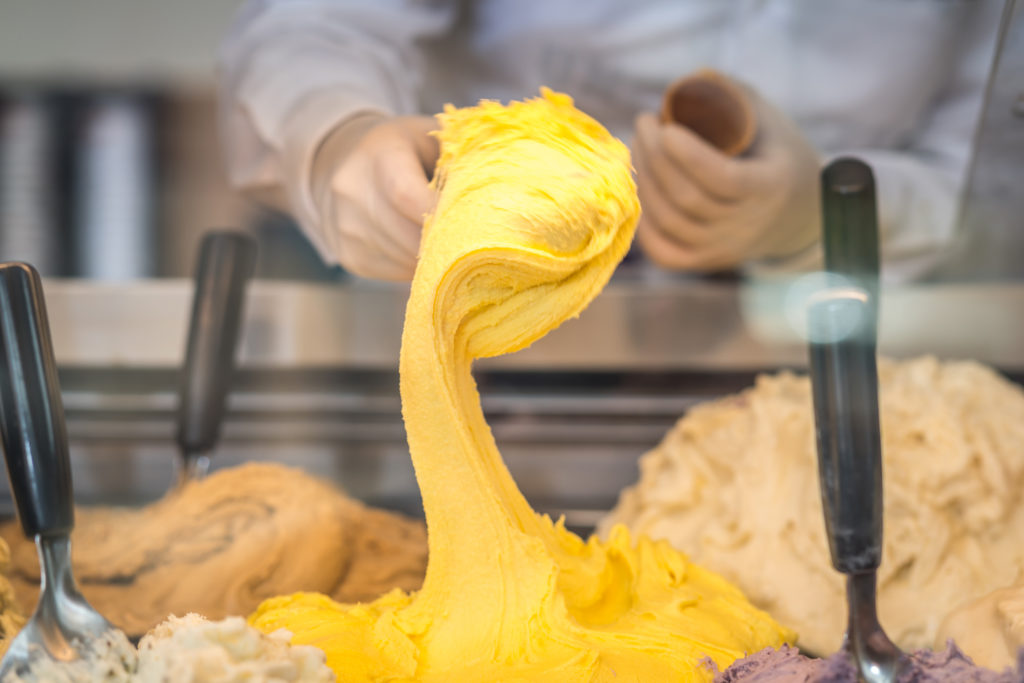 Sometimes they are inspired by “traditional dishes or ingredients associated with the cuisine of the restaurant,” as with Win Son – a Taiwanese-American restaurant. Inspired by the classic guava and plum powder combo which is a conventional way of eating this fruit throughout Taiwan, Republic of Booza created Win Son’s Guava-Plum Powder Sorbet using fresh ripe guavas and plum powder of a Taiwanese brand. And other times, they may borrow ideas from a connoisseur, such as a cookbook author Emily Miller who has created a Malaysian breakfast-inspired flavor for the Republic’s customers: Pulled Tea and Kaya Toast. The special flavor has a magic to bring us back to the origin place!

Thanks to their curiosity and creativity, Republic of Booza discovers hyper-regional food specialists and artisans as well as authentic hidden gem products, reintroducing familiar classics and taking them to a new level. And it is the historical booza that they use as a medium to explore modern culinary trends. 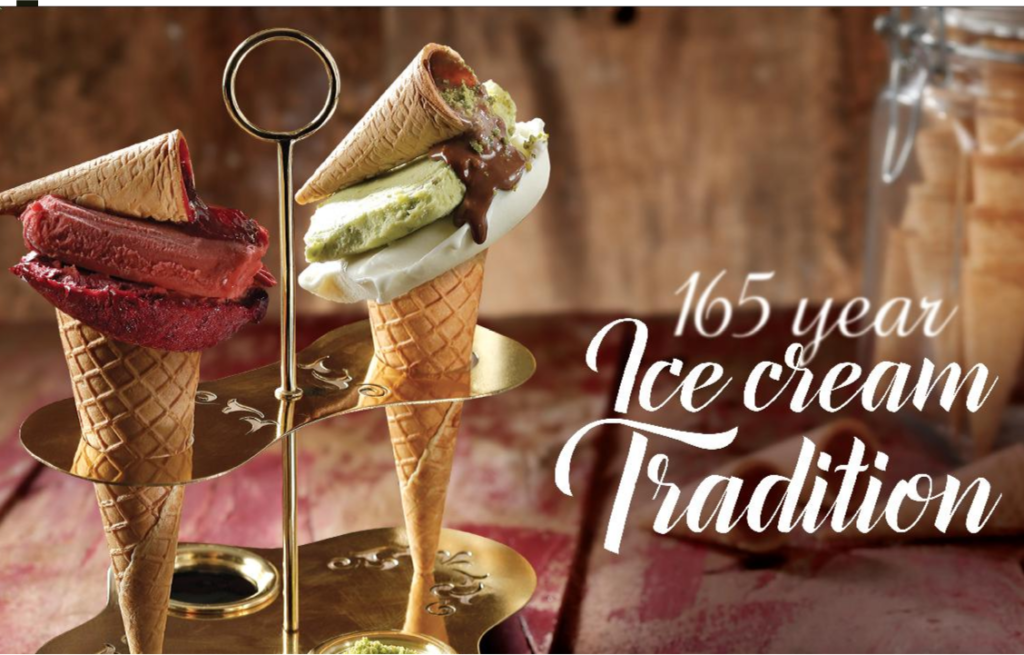 Ice cream “matchmaker” MADO is probably the first brand coming into mind when speaking of dondurma. Born of humble beginnings as a family-owned ice cream vendor in Kahramanmaras, Turkey, this over 150-year-old brand has grown into one of the biggest and most renowned producers working as cafes throughout the nation and world. According to MADO, China was the first and foremost country where it entered the Asian market, primarily due to Chinese consumers’ concepts in consumption upgrade and their attention to high-quality brands. Currently, MADO China has two stores in Yiwu, Zhejiang Province and three in Guangzhou, Guangdong Province because of their inter- national identities in the Belt and Road Initiative.

To ensure the special texture and unique taste of ice creams, MADO insists on using the milk of goat grazing tragacanth in addition to salep and mastic. Luckily, it is said that every single dondurma sold in MADO China is 100% naturally made in Turkey, which means customers are able to enjoy the full Turkish flavor. “We would specially select other food to pair with our ice creams, from Turkish coffee to soufflés and other desserts. And sometimes we use dry ice on dondurma when pairing with hot Turkish delights,” said Phil Fan, Marketing Manager of MADO China’s Yiwu Stores. For those who are on diet or prefer a healthier lifestyle, MADO has also invented Light Salep which is sugar- and starch-free, and rich in probiotic fibers.

What’s more, you can even enjoy dondurma as a fine dinner. Instead of holding cones, it can be more fun to eat MADO ice creams with a knife and a fork. One bite after one cut, the stiff-looking ice cream dissolves immediately right in your mouth as opposed to its hardness.