Hainanese chicken rice is beloved by Singaporeans and there are many ways to consume this dish: choose between roasted or steamed chicken, spice up the fragrant rice with a dash of garlic-chilli or a swirl of dark soya sauce. But never before have I faced these options for chicken rice: cone or cup?

Yes, in food-obsessed Singapore, chicken rice now comes in the form of a cool refreshing scoop of gelato, and it’s not the only Singaporean food that has made the leap from plate to pint. Local hawker favourites like spicy Laksa noodles, the savoury coconut rice of Nasi Lemak and even the famous chilli crab have all been transformed into ice cream, thanks to enterprising artisanal ice cream makers pushing the boundaries of flavours for the Singaporean palate. Back then: Pushcarts and Potong

Singaporeans are familiar with local ice cream flavours like sweet corn, red bean and yam popularized by roadside ice cream street hawkers that date back to the 1970s. These mobile carts typically stock ice cream from big brands like Magnolia and Walls that are also commonly found in supermarkets and provision shops. I always eagerly watch the ice cream man fish out the block of my chosen flavour from his cart, cut off a small chunk with his long knife, and then hand me my ice cream either sandwiched between two crispy wafers or a slice of rainbow-coloured bread.

In the supermarkets, ice cream with local flavours is usually marketed as Potong – the Malay word for cut – those same rectangular chunks now come with a stick in the middle for easy eating. As a child of the 80s and 90s, I remember seeing salesmen with their large styrofoam boxes canvassing the corridors of Singapore’s apartment blocks, offering boxes of mango, coconut and even the infamous durian Potong right on your doorstep.

But for your average Singaporean, ice cream in most places tends to be a choice between the standard chocolate and vanilla, with the more adventurous opting for strawberry, raspberry ripple or mint chocolate chip if available.

People who really wanted local flavours headed to the hawker centres instead to enjoy an array of cold and hot desserts: ice kachang with a pile of shaved ice atop red beans and jelly bits, a warm bowl of black glutinous rice porridge better known as Pulut Hitam, or the ever-popular Chendol with its strands of green jelly atop a mix of shaved ice, coconut milk and palm sugar or gula melaka. In short, ice cream and Singaporean desserts were separate entities.

The diversity and variety of ice cream flavours in Singapore really started to grow in the early 2000s thanks to the opening of artisanal ice cream shops with enterprising ice cream makers looking to differentiate themselves from mass production brands.

Island Creamery made waves when it opened in 2003 because it took flavours Singaporeans knew and loved from local drinks and desserts and transformed them into ice cream, which no other shop at that time was known for doing. They would become known for signature flavours like Chendol, malted drink Horlicks, Tiger sorbet made from Tiger Beer, and Pineapple Tart, inspired by the popular pastry eaten during Chinese New Year.

Founder Stanley Kwok explained that to stand out from the household brands, Island Creamery focuses on producing premium ice cream with an emphasis on fresh ingredients, a tradition that continues even till today. “You can’t keep our ice cream in the freezer for too long. We make our ice cream fresh here, every day,” said Kwok, gesturing at the bustling kitchen behind the ice cream counter at their shop in King’s Arcade. “Take one of our most popular flavours Pulut Hitam for example – we have a guy who chops cartons of coconuts everyday just to get the fresh coconut water, and we boil the black glutinous rice in our kitchens and make it from scratch.”

While deciding on some flavours to taste for this article, Kwok recommended Teh Tarik, the pulled tea drink you can find in just about any coffee shop in Singapore. “It’s one of the flavours that needs a lot of work to prepare as we need to steep and extract the tea before we churn the ice cream,” I found the tea taste quite well-balanced and not overly bitter or acidic, and bought a pint to take home with me. In the 17 years since Island Creamery’s launch, the artisanal ice cream scene has grown significantly, with numerous new shops popping up all around Singapore. Many have their own unique spin on ingredients and concepts that have earned them loyal followings, but The Humble Scoop has some of the most nostalgic and inspired flavours.

Opened by Yvonne Kwek in 2018 in the basement of the aging Katong Shopping Centre, every flavour in The Humble Scoop is inspired by a personal memory Kwek had of growing up in Singapore. “I read an article once of a chef saying that Singapore doesn’t have its own unique flavours since our local food actually comes from all over the world and then adapted to suit our tastes. I realised that what truly belongs to Singaporeans are the memories we had of living and growing up in Singapore, so I wanted my ice creams to resonate with those memories and make people remember the happiness they felt then.”

The memories behind The Humble Scoop ice cream flavours are detailed on their website, but I could easily relate to many of the flavours and names in their shop. Kopi-C Siu Dai is a drink more commonly heard yelled out in the local coffee shops, a coffee brew consisting of sugar, evaporated milk and less condensed milk. One of Kwek’s personal favourites is the Guava Sourplum sorbet, which brings to mind one of the unusual ways her family and other Singaporeans eat guava and other cut fruit – by dipping it into sour plum powder.

I ended up picking Kwek’s other personal favourite flavour to try: the citrusy and refreshing Gam Xia, a play on the Cantonese name for Mandarin Orange and the phrase for ‘thank you’. I was surprised by the bits of chewy dried orange peel in every bite, reminiscent of a local snack I ate as a child. 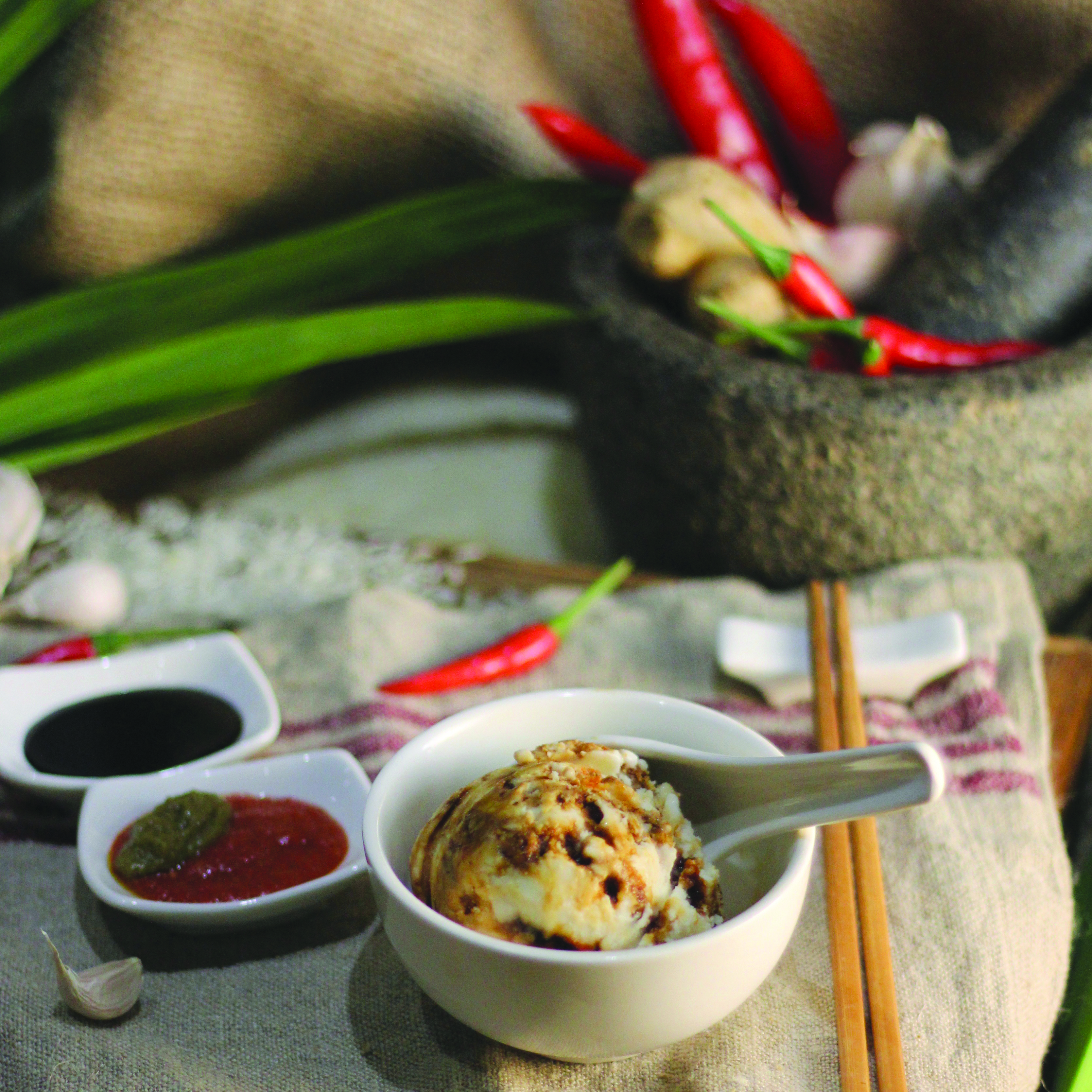 Another long-standing artisanal ice cream shop that has piqued the palettes of Singaporeans since 2005 is the quirkily named Tom’s Palette. Founder Chronos Chan and his wife Eunice Soon had no culinary experience and started the shop after a chef friend taught them to make chocolate ice cream, but in the following years gained a reputation for some truly unusual flavours like White Chocolate Nori (Japanese seaweed), Soya Bean Dough Fritters and Parmesan Cheese and Crackers.

To my surprise, Chan shared that he actually does not like sweet food, which pushed him to explore different flavour profiles in ice cream and create many of Tom’s Palette’s unique and savoury flavours. “I’m always curious about how any food will taste in ice cream form,” Chan said, “Why not? That’s the question we always ask when it comes to a new flavour.” He estimates that Tom’s Palette has created a whopping 190 flavours in the shop’s history, “we are constantly innovating and don’t want to be known for just one particular flavour.”

Of the locally-inspired flavours that Tom’s Palette has produced, Chan listed Nasi Lemak ice cream as one of the most memorable. Nasi Lemak is a Malay dish consisting of fragrant coconut and pandan rice and topped with dried ikan bilis anchovies, peanuts and other savoury add-ons, definitely not a food one would expect to find in ice cream form. Chan shared the painstaking details of its creation, from the detailed research of cooking methods to balancing the ingredients used to highlight the main features of the dish. The result: an ice cream made from glutinous rice infused with coconut, pandan and lemongrass, and topped with a blended mix of white chocolate, ikan bilis and peanuts that was instantly recognisable and surprisingly popular among customers.

I frequented the Tom’s Palette shop at its old premises when my office used to be in the same building, and every visit was always an adventure as they rotate the flavours very frequently. On this visit to their new shop along Middle Road, I considered the Hainanese Kaya (a coconut spread usually found on toast) briefly, but instead opt for some Milo Dinosaur, a childhood favourite based on the malty chocolate drink with chewy bits of Milo powder, paired with a scoop of Salted Egg Yolk which I prefer over actual salted egg yolks. How about that Chicken Rice gelato? Butterknife Folk

And now let’s talk about that Chicken Rice gelato that kicked off this story, which I first encountered at Butterknife Folk which opened in 2016. Chicken Rice is just one of the slew of Singaporean food-inspired flavours that the shop made available in the month of August 2020 in celebration of Singapore’s National Day, intrigued by the thought of one of my favourite local dishes as a dessert, I dropped by their shop at the revamped Funan Shopping Centre and opt for their taster set of three small cones that also allowed me to sample Muah Chee, a glutinous rice snack coated with peanuts, as well as White Rabbit, based on the Chinese milk candy that’s also a favourite of Singaporean children.

If you were wondering how exactly this chicken rice gelato tasted, I could immediately pick out the distinct chicken rice flavour with a hint of ginger, garlic and chicken stock at first bite, along with a few improbable grains of rice as I chewed. It was a little surreal to encounter these savoury tastes in a dessert, but not bad tasting at all.

The surprisingly enthusiastic reaction from customers to the Chicken Rice gelato was what kicked off the creation of other savoury flavours at Butterknife Folk. “We made Chicken Rice gelato for our own entertainment,” said founder Ingrid Lim, “it was to push the technical boundaries of creating savoury gelato flavours and whether we could get the gelato to taste exactly like the original dish, just in a cold and creamy form.”

While I might not be stocking up on pints of chicken rice ice cream anytime soon, I’ll definitely keep visiting Singapore’s artisanal ice cream shops to see what other Singaporean dishes get turned into ice cream flavours. 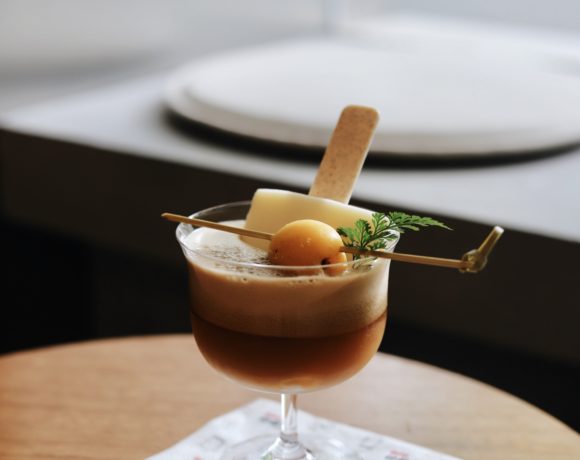