Eureka Coffee Tap, the first nitro coffee tap bar in Thailand, boasts not only a lineup of six nitro taps in store, serving a wide range of nitro-infused drinks, but also offers visual-appealing signatures with local ingredients, such as Durian Thai Milk Tea and Papaya White Chocolate Cold Brew. Nitro-infused drinks are the big trend across the globe.

Here is the story: In 2011, a barista at coffee hub The Queens Kickshaw in New York, USA ran into a situation with iced coffee when the shop installed its draft system, the shop’s owner Ben Sandler answered, “Why don’t we just push it through the draft system?” It then turned out to be a really good idea that the big coffee trend of that summer is still ongoing in 2019 though the 2011 Kickshaw’s version of the drink was without the infusion of nitrogen. Two years later, the renowned Stumptown Coffee in Portland served its first nitro coffee on tap, which became a huge success. The coffee roaster debuted its nitro cans as early as in 2015. 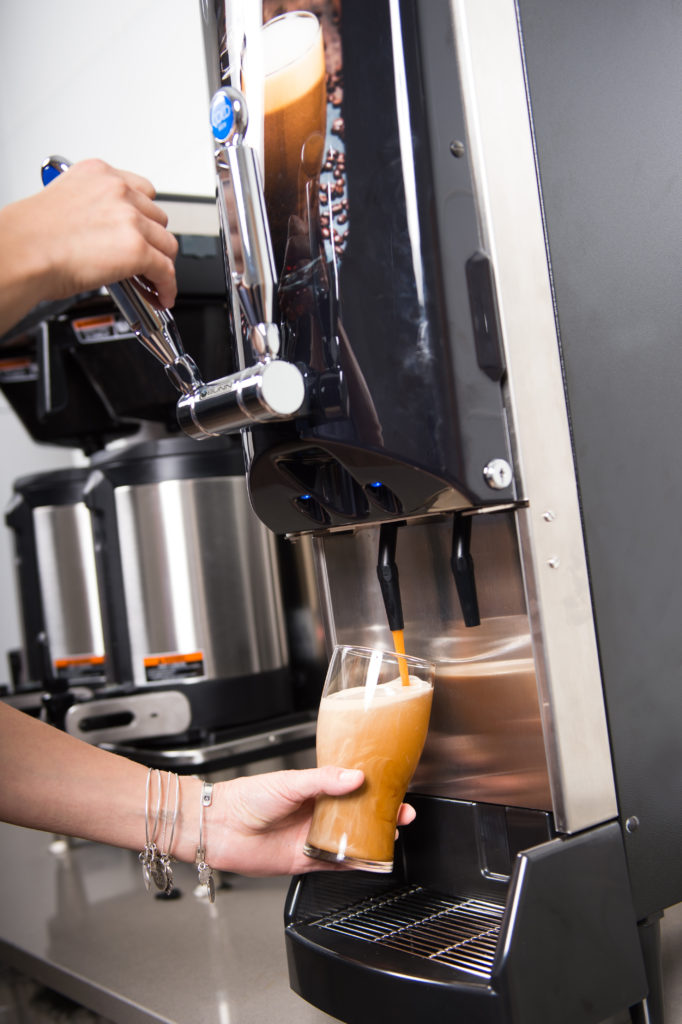 The Culture of Taps

When all beverages go nitro-infused, it becomes rather important for cafe owners to find the right palate of taste catering to their customers. In short, all drinks can be infused with nitrogen gas.

Someone once said, “There is something poetic almost romantic, about a freshly-poured pint of stout from a nitro tap.” That’s more than true. According to NitroBrew, the mouthfeel of a nitro-infused drink enhances the smooth and creamy taste and the visuals are captivating with the beautiful cascading of nitro bubbles. Maybe, that’s why the nitro-infused frenzy has gained such long-lasting popularity worldwide, either beverages like coffee, tea, and cocktail or the unexpected milk.

In 2017, Starbucks introduced Nitro Flat White and Nitro Milk in selected stores in the USA. Now, you can see Nitro Cold Brew with Cascara Cold Foam on its menu, which is capped with cascara flavored cold foam. In some cafes, you may find nitro-infused kombucha, wine and tea latte. According to enhanced beverage solution, it is recommended to infuse a low-to-no carbonation kombucha for the best infusion. It doesn’t matter with the flavors. For wine, there is no limitation but recommendation: Chardonnays, or heartier wines like a Malbec, Zinfandel or Shiraz. Feel creative? Try exploring sangrias or wine-based punches.

The First Step to Establish Your Tap Culture

Countertop System The system features a ready-to-use dispenser that nitrogenizes and dispenses beverages without need for additional tanks. Nitron® Cold Draft by BUNN® is a user-friendly keg-free platform with a special in-line gas infuser that can produce up to 3 minutes of cascading micro-bubbles for a silky stout-like mouthfeel.

Inline Tap System The on-demand beverage nitrogenation system is suitable for cafes and restaurants to serve different “base” drinks for gas-infusion. Additional tanks for beverages are normally hidden under the counter. It also allows you to use different gases for your drinks. NitroBrew®Inline System allows users to choose different gas sources, nitrogen from air or from gas cylinders.

Portable Keg System Normally, the system comes with a keg, a serving tap or two, and a nitrogen cartridge & regulator. It’s portable and some small sized versions can be fitted into your fridge easily. It is the best option for home users, small cafes, and private occasions like parties.

Single-serve System Also suitable to use at home, NitroBrew introduced the system to make any drink a nitro drink at the time of service with no need for nitrogen cartridges but one air compressor. Such a revolution in nitro dispense makes it possible to beautifully balance carbon dioxide and nitrogen in beer and infuses nitrogen into any drink just before serving. No more guess work. It is a great pal to work with and make creative drinks.

According to NitroBrew, the tricky part is how to maintain nitrogen gas in a drink. “Slight changes in the temperature of the beverage, gas counter pressure, or the counter pressure on gas composition dramatically affect the quality,” NitroBrew representative explained. So please bear this in mind: The key is to infuse the drink just before serving to get the consistency in quality.

Catering to the Masses

Nitro-infused drinks are so popular among customers due to a wide variety of drinks to choose from. “They are fun to make and watch and amazing to taste,” NitroBrew shared. As more and more customers become conscious of physical health, requirements like low in calorie and sugar make nitro-infused drinks a great alternative. Meanwhile, to those who are allergic to dairy products and gym-goers, such dairy-free drinks allow them to enjoy without worries.

Take nitro coffee as an example. Nitrogen creates a dense thick head with beautiful golden cascade and micro bubbles. The taste of coffee will be slightly sweeter, lower in acidity and bitterness. (Don’t forget that the choice of coffee beans also matters.) However, it should be noted that the caffeine content in nitro coffee is usually higher than in normal cold brew.

As the RTD trend is going on, more and more coffee brands have launched their canned version of nitro coffee, introducing more fun flavors to customers. For example, a series of nitro coffee, including four flavors, is made available by Sail Away Coffee in New York. Ranging from Horchata, Sea Salt & Caramel to Sweetened and Unsweetened flavors, the RTD package will allow more coffee lovers to enjoy java wherever they go, even on the beach!

Meanwhile, nitro-infused cocktails are becoming the latest trend in the mixology world. Believe it or not, One Point Eight in the UK was the first bar to serve Espresso Martini on tap as early as in 2015! Now, you can also find canned versions of such cocktails on the shelf. There are benefits and drawbacks of nitro infusion into beverages. However, as technology develops, better results will be achieved with more options of nitro-infused liquids for us!