Ice cream is a hard currency in the market of taste buds; No matter how much the world changes, you can always find someone expressing their loyalty to this delicacy. Such passion has composed an ethnic medley of ice cream. When American soft ice cream step onto most lands, other ice cream of different types and forms also glitters across the world: Dondurma from Turkey and Booza from Syria stand out with rich milk flavor and chewy texture; Spaghettieis from Germany, a fun novelty in Spaghetti shape started in the 1960s, has captured local lovers; and Es Puter from Indonesia presents a great blend of coconut milk, fertile screw pine leaves and sugar.

As one of the most time-honored ice creams, gelato still rests on its laurels with strong industrialization and modernization in Italy. The golden trademarks of “Made in Italy” and “Italian Techniques” also win gelato more chances, making it prevail from country to country.

However, gelato still needs to evolve, in a bid to clear the way for the launch of other food culture, and also to find a local-preferred flavor to root in the market. To get a better idea of this, we talked to Iris Wang, brand director of Dallatte Gelato.

Going global is not just driven by confidence in products, but also by the curiosity and acknowledgement of the target market. Just like its Italian fellow espresso, gelato gets the green light on the expedition to other countries because of its nationality, a tacit symbol of high quality. “When we brought our brand to China, the first thing we did was not developing recipes. Instead, we want to provide authentic gelato.” Said Iris, who believes the priority is to distinguish gelato and American ice cream. The fascinating charm of gelato comes from the high content of milk, strictly-controlled air incorporation between 15%-25% and dense texture; These form the bottom line for gelato.

In its birthplace, gelato shows up in two forms: made by industry or artisan. Industry ones normally find their place in supermarket freezers and online stores, different from their artisanal counterparts in texture, method and packages. Dallatte, which has expanded its stores in Milan, Turin and Alba to China, falls into the artisan category. In the pursuit of authenticity, Dallatte takes recipe, production and store as its three key values.

As many judge gelatos on the quality of hazelnut and pistachio, Dallatte specially chooses Italian-sourced puree and gets a good mark in this regard. Notably, the brand is also proud of its Tiramisu flavor, a graceful representative of Italian desserts. Dallatte “deconstructs” the white-and-brown cake into elements like Mascarpone cheese, sponge fingers and coffee, and adds these ingredients into gelato one by one to construct a texture and flavor layer no different from the dessert. To further grace the texture, the unique icy touch cleanses the palate, creating a masterpiece of ice cream.

You can walk into a random ice cream store, and find colorful ice cream put in low temperature pots and placed in rows under shiny filament lamps, as if they were showing off their vibrant colors and rich fillings through the glass. This is the same for many gelato stores, but not for Dallatte. Iris firmly says no to this eye-catching practice, as it puts gelato under the same temperature and makes it difficult to control quality. “If you slide the freezer door again and again, you can’t keep the set temperature at -12℃ and may affect the texture of gelato. It may also lead to tainted flavors. Many stores use stabilizer and emulsifier to ‘solve’ these problems”. Unlike these stores, Dallatte follows how it operates in Italy and purchases expensive Carapina independent seal pots to store gelato. “Of course, these is a shortcoming of this practice. You can’t see the gelato. But apart from this, there is no downside. We think it is professional and responsible for our customers.” Added Iris. As for samples, Dallatte makes no difference from other stores and encourages customers to try the flavor they want before they make a choice.

When it first came to China, Dallatte replicated all the flavors in its Italian stores. In the up to 30 flavors, there were many unfamiliar ones to customers not coming from the boot-shaped country, like common herbal flavors such as violet, lavender and rose. Iris told us frankly that the intention to attract customers with varied flavors was let down by “choice paralysis”. New customers often felt lost in front of so many flavors, and finally just picked traditional flavors that they felt familiar with. 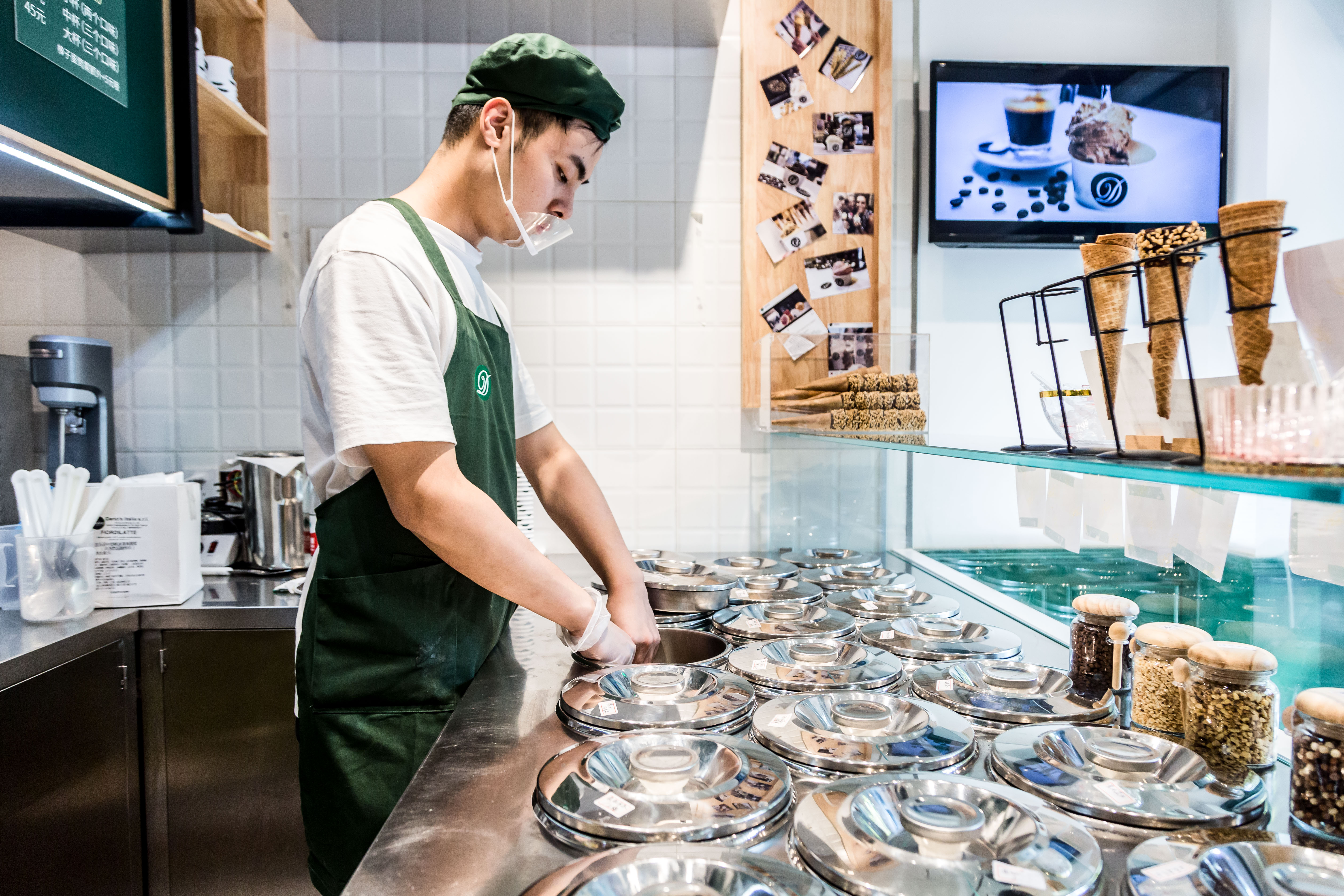 After operating for a while, Dallatte decided to limit flavors to around ten, regularly change flavors, and adjust according to season and customer preference. “We must make sure that all regular flavors don’t go wrong. Even if a customer closes his eyes and picks a random one, they wouldn’t feel bad and regret it.”

Iris believes some bad comments come not from poor flavors, but the wrong choice. She insists it is neither the problem of the store nor the customer. To explore the right choice, Dallatte takes limited flavors as a way to domesticate their gelato, and has launched flavors like mango pomelo sago. With a special interest in alcohol, it has also tried flavors of IPA beer and noble rot wine.

“Australian botrytised wine (noble rot wine) is not a traditional flavor in Italy, but a novelty of our relentless research. We focus on sweet wine that girls love and cooperate with a wine supplier. We finally create this popular flavor according to freezing resistance and flavor performance of wine.” Another research effort is for sugar content. As Italians have a sweeter tooth than Chinese, Chinese customers may find the authentic Italian flavor fascinating at the first bite, but struggle to finish a whole scoop of gelato. Iris shared Dallatte’s tactics to find the ideal sugar content. “Lemon water is available in our stores. When customers ask for lemon water, it means they start to feel too sweet physically. Based on this, we made a large adjustment in 2020.” 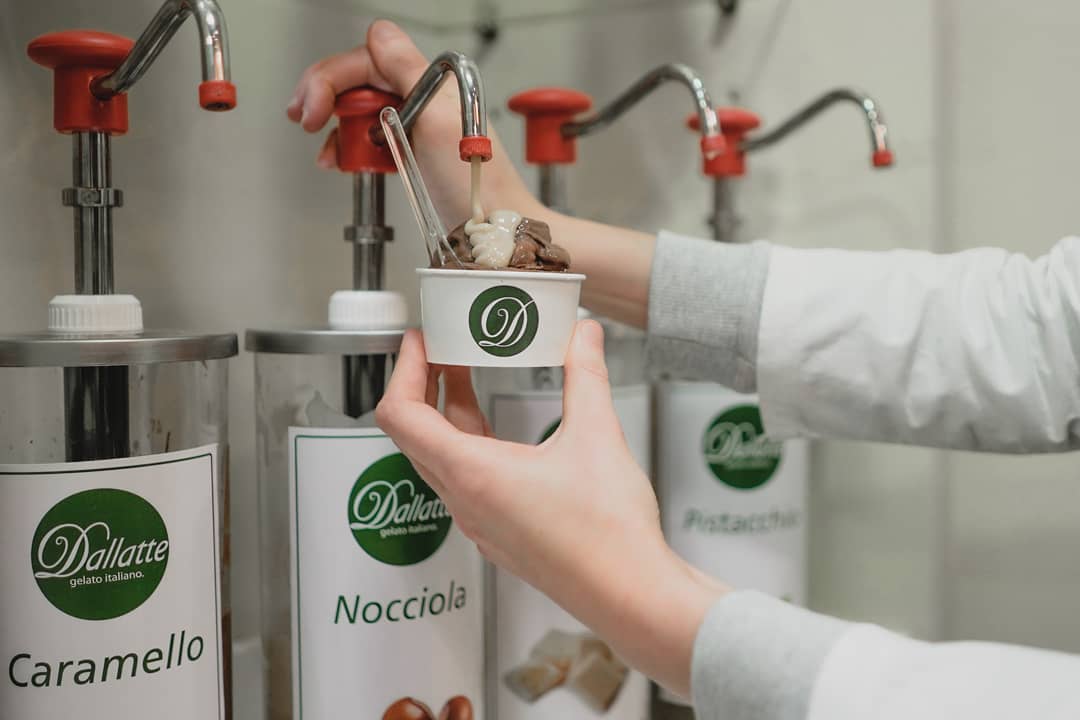 While respecting Italian gelato culture, Dallatte seeks to be humble and friendly to Chinese customers. “We don’t want to be arrogant in this easy and delicious process, like launching unfamiliar flavors without second thoughts and resisting adjustment to sugar and fat content. We want to keep the high-class feeling of Italy. We don’t provide something self-righteous and give a sense of distance.”