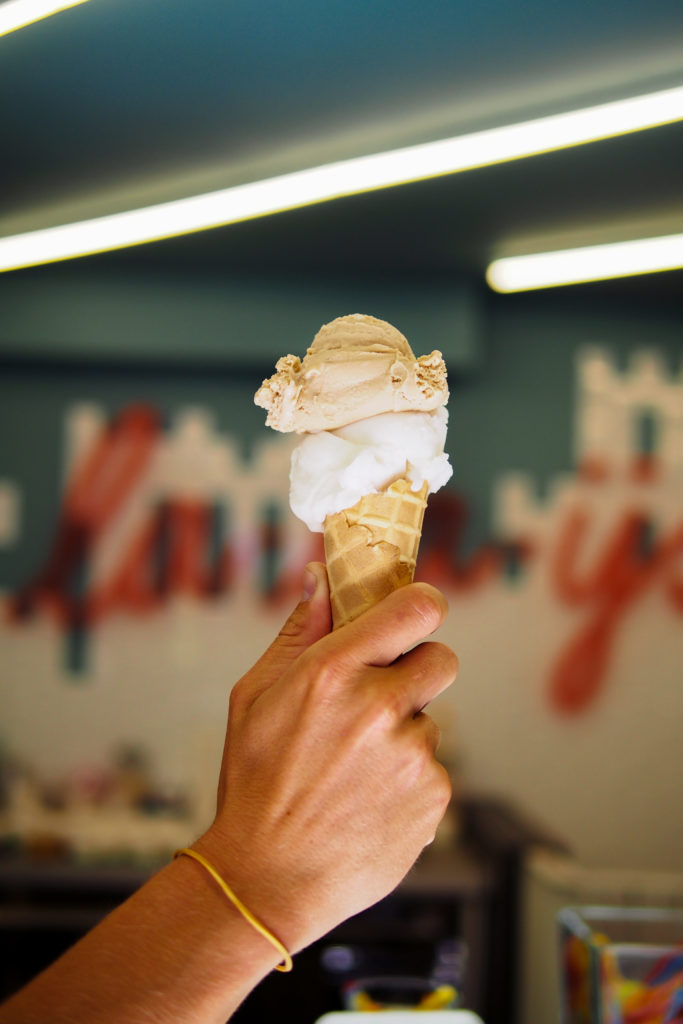 The hangover-curing, probiotic-packed kombucha now has an ice cream form that will make people salivate. With more brands dedicating themselves to innovate with new flavors of ice cream, some of them have started to blend beloved kombucha into something that would give customers a double treat, something like ice cream. Hold on, the opposite of kombucha, craft beer, is doing the same. Its ice cream version can taste as fruity as a sorbet or as creamy as a chocolate brownie, apart from you may feel a little dizzy after the indulgence.

Sustainability is an important topic for any people on the planet. Here is a story about how kombucha wastes are turned into ice cream. When YAYA Kombucha started as a small kitchen project, the owners Tom Vollebregt and Charlotte Krijger hadn’t a clue how far they could go. Now, as one of the leading brands in Europe, the kombucha specialist has not only introduced a selection of flavors but also offered limited edition ice cream. I am not talking about kombucha floats but proper kombucha-flavored ice cream.

Based in Amsterdam, the Netherlands, YAYA Kombucha is a dedicated brewery for this popular fermented beverage. “Every year, we try to make something special,” shared Krijger, co-founder and brewer of YAYA Kombucha. “Together with local ice cream maker Michel Smit from De IJsmakerij, we developed a ginger kombucha lemon sorbet (vegan) and ginger kombucha caramel ice cream.” 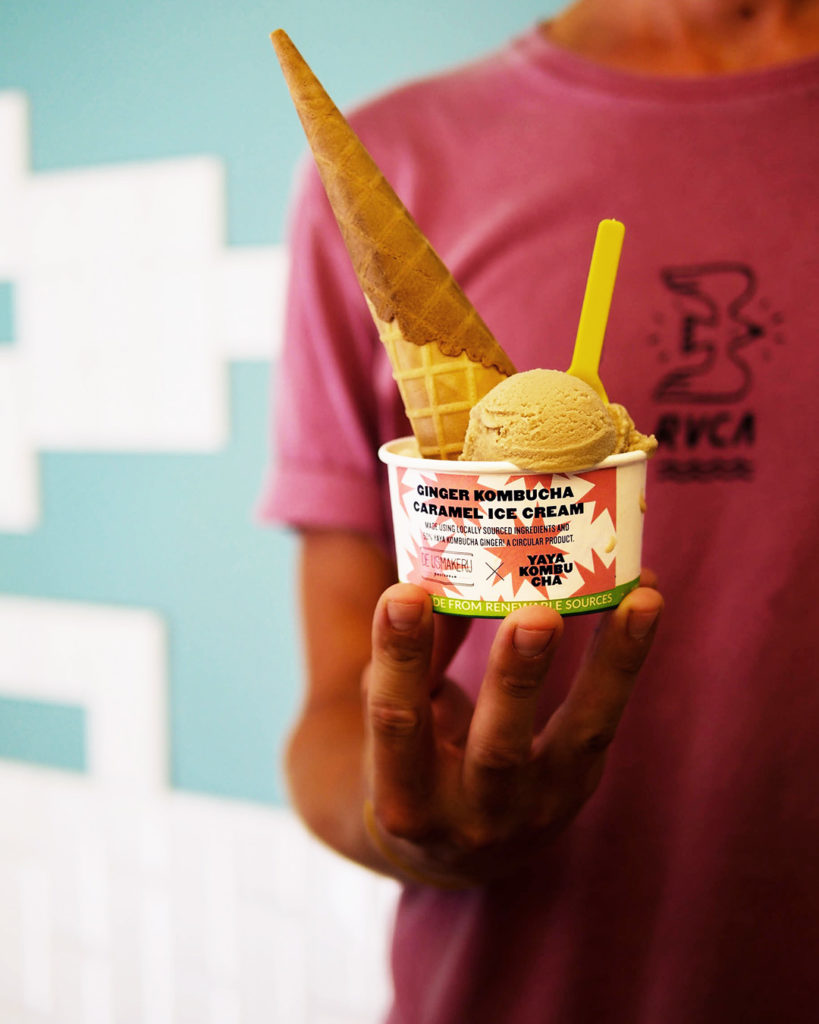 To Krijger, the idea of making kombucha ice cream came from her exploration on how to make full use of food wastes. “When we make our ginger kombucha, we add cold pressed organic Peruvian ginger juice. In the process of making the flavor, the starch (a type of white residue) will fall to the bottom of the tank. The ginger residue would color the kombucha drink brown, which didn’t look good. So, we used to throw it away. What a waste, right?” Krijger explained. The question led to sessions of brainstorming with her team, which resulted in a collaboration between YAYA and De IJsmakerij. According to YAYA, the milk used in the ice cream was locally sourced from a sustainable farm. De IJsmakerij is a sustainable shop as it uses solar energy to power the ice cream making machines.

Krijger told CTI, “I love that we found a way to re-use our waste product and made it into something delicious!” Krijger believes that it is important to choose the right kombucha to make ice cream: one with a strong yet well-balanced flavor and aroma profile. “This way, you can still taste the typical kombucha flavor in your ice cream. Ginger flavor is just perfect for that.” 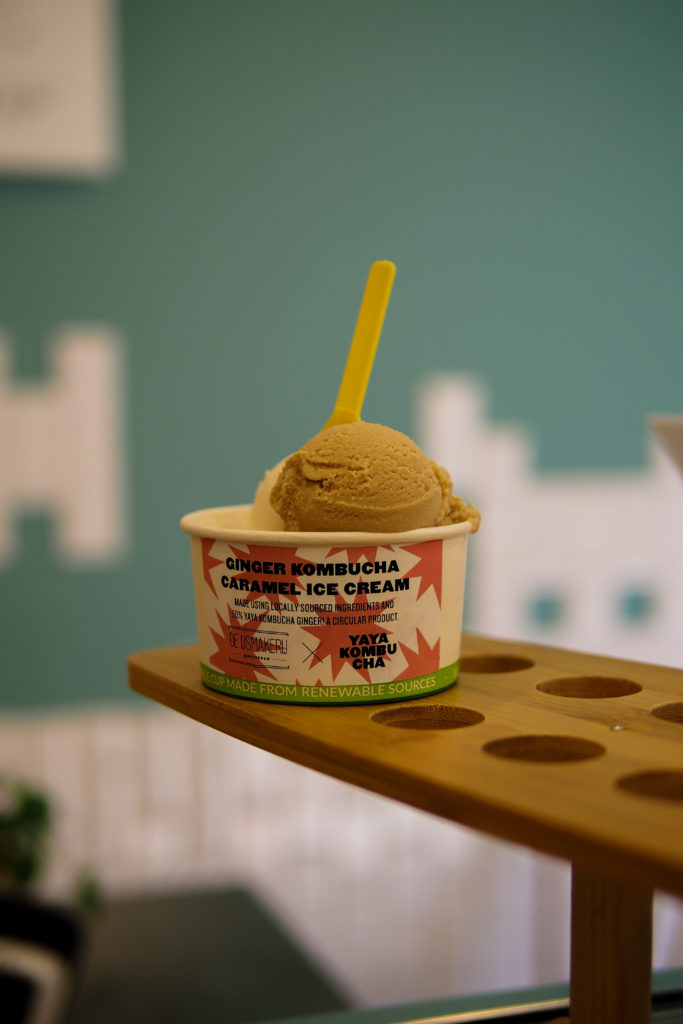 Innovation didn’t stop there as Krijger and her team also love to experiment and make something new. “We are looking for that ‘yes, I can drink that whole bottle or eat that whole bucket of ice cream right now’ vibe. It needs to be just right,” stressed Krijger. “The flavor and aroma of our Citra Hop kombucha is one of a kind, floral and citrus-fresh! I can imagine this would work well in any sorbet or dairy ice cream,” she suggested.

A bliss point is sometimes referred as a good balance between sweet and sour in kombucha making. To customers, a chilled treat in your favorite kombucha flavor can be the best of both worlds. To Krijger, this may be running a sustainable business full of innovative kombucha flavors hitting that “point”.

You can simply drink craft beer or use it to cook or bake. Now, there is one more way to enjoy hand-craft beer, just by licking! When you search online where to get a pint from local ice cream makers, Qi Jiang from Shaoguan of Guangdong Province, China took a different approach, introducing craft beer into ice cream by himself. Jiang is the owner of Maillard Coffee. With a solid knowledge of and great passion for craft beer, he decided to use craft beer from different brands to make soft serve every day. The month-long project began in July. “I love craft beer a lot. So when I bought a new ice cream maker for the cafe, I wanted to do something different,” said Jiang, “Everybody loves to try whatever in new flavors. ‘What if I make ice cream from a different-brand craft beer every day?’” That was how he started an interesting experimental journey. 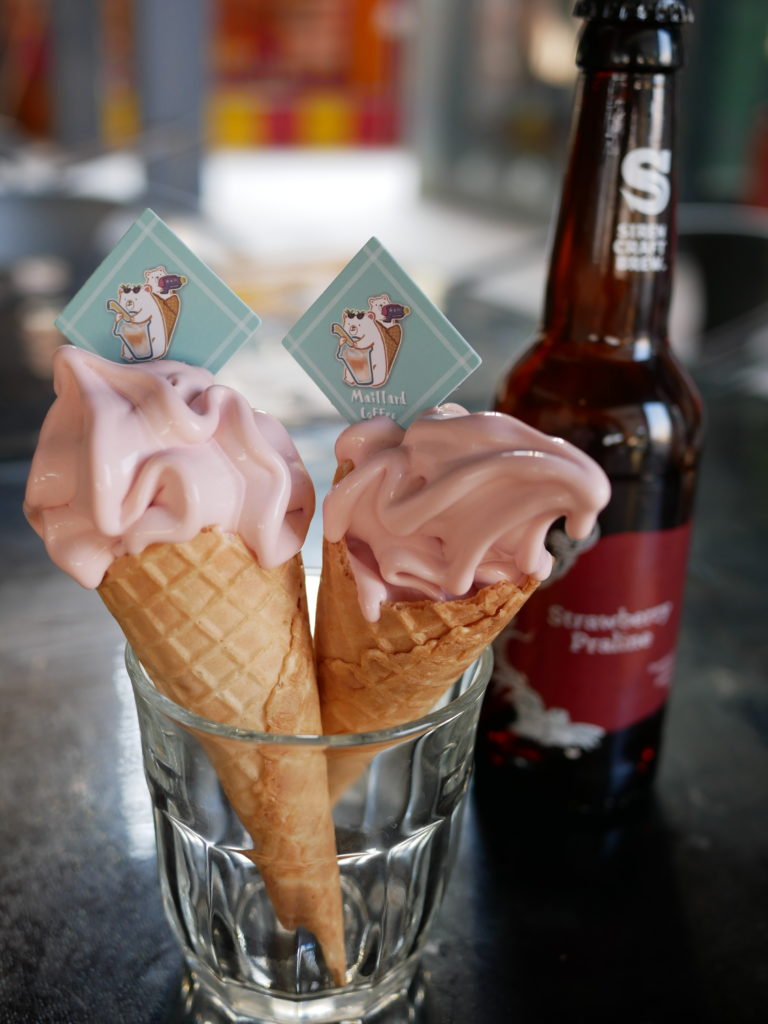 To Jiang, ice cream is a medium to introduce craft beer to more customers. “Most people prefer IPA (Indian Pale Ale) rather than Stout or Porter due to their strong taste. I hope craft beer ice cream can bring out its best attributes, helping people to explore more flavors and opening a door for them to know more about those hand-craft beer brands,” he told CTI.

Alcohol by volume, or ABV, is used to describe how much alcohol is contained in the beverage. Normally, craft beer is lower in ABV than liquor like vodka or tequila.

“When people started to question whether the ice cream contains alcohol, I decided to make two versions, one with beer and one without for them. In seconds, they can taste the difference,” shared Jiang. Unlike other beverages, craft beer adds layers of flavor to ice cream. “Day by day, customers started to taste the difference even between brands.”

The wide range of craft beer gave Jiang a big stage to play with flavors. However, not all beer is great for ice cream.

“After one-month trial, I have developed my own recipes for ice cream making. Beer with different taste profiles will be matched to different ice cream bases. For example, Classic Imperial Stout goes perfectly with vanilla ice cream.”

On the other hand, some customers judge the ice cream by whether it can taste a hint of beer. According to Jiang, it completely depends on the flavor profile and ABV of the chosen craft beer. “Many craft beer breweries work hard to mask beer’s high ABV and make it taste lighter with a super smooth mouthfeel. The low temperature of ice cream also contributes to the illustration. That’s why many people feel dizzy and drunk without realizing it when they have craft beer ice cream,” explained Jiang. During the R&D process, Jiang said the most interesting part of craft beer was that every brand, every country had their own preference of sweetness in making beer. “You can compare a collection of a certain type craft beer to taste the different level of sweetness. It’s just like cupping in specialty coffee,” he explained, “I add chocolate, vanilla, espresso shots or other ingredients to test. Craft beer here is like salt in cooking, different types of salt for different dishes.” For example, Jiang used chocolate ice cream base with Chocolate Stout. The month-long project finished quickly. But such a trial project has brought many ice cream and craft beer lovers to Maillard Coffee. “I guess I will continue to offer craft beer ice cream, say one day a week afterwards,” shared Jiang.

Sometimes, it’s hard to get the best of both worlds. But when it comes to ice cream, innovations always help to tick all of our boxes, giving us some reasons to enjoy the combo taste as a double treat.

Inspired by the specialty coffee scene in Shanghai, Qi Jiang established his coffee shop Maillard Coffee in 2015 in Shaoguan. 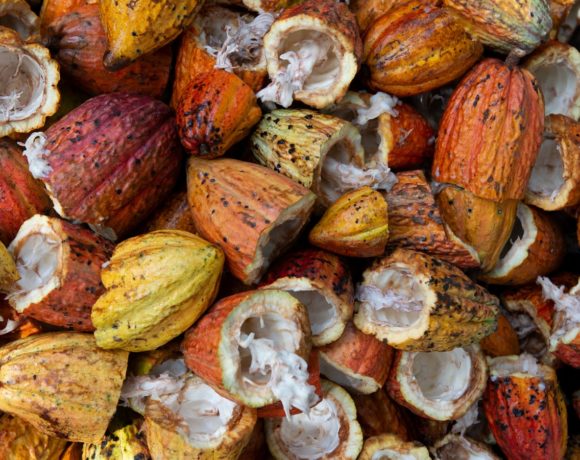 Think You Know Chocolate? So Did We