Bite after Bite, Giddy with De.. 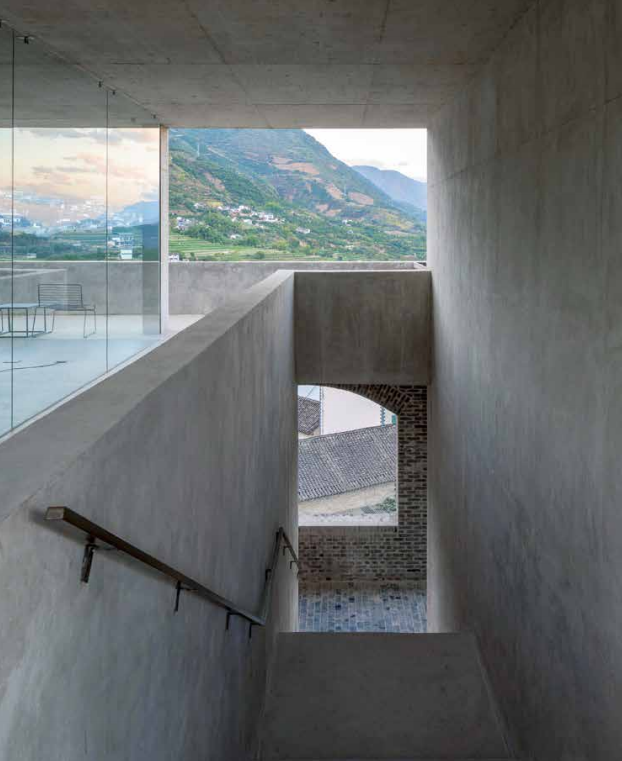 Xinzhai Coffee Manor is located in Lujiangba, Baoshan, a world-recognized origin of Arabica coffee in the Yunnan Province of China. The site itself sits on a plateau in the middle of Bawan Village at the foothills of Gaoligong Mountain, overlooking the landscape of Lujiangba Area and the Nuijiang Valley to the north. Through renovation and addition, guests see a multifunctional complex that houses coffee storage, processing, tasting, sale, hotel rooms, coffee museum, and auditorium; all to provide visitors with premium holiday experience on par with the high quality coffee and pleasant resort scenery.

The site consists of two sets of courtyards filled with lush trees, an abandoned cinema, and a grey brick building originally built in the 80s. Most buildings on the site as well as in adjacent villages are made of brick, and there is even a kiln that still produces grey bricks near the site. These local features triggered the initial desire to build with bricks. Today, brickwork remains the predominant construction method in the area; consequently, brick leads to different vault forms in the architecture, as you can see in the circuitous entry way. Driving up the village X road, one will experience a steep climb and a few sharp turns before reaching the manor at the end.

From the enclosures in the courtyards to the broad scenic view upon entering the main building, this complex constructs a narrative experience of compression and relief. The new building is connected to the old cinema through a set of corridors, forming three courtyards–the central courtyard, the tree courtyard, and the sunken courtyard. Visitors can reach functional areas through corridors from the central courtyard. Surrounded by existing trees, the buildings present themselves in the background of the courtyards connected by corridors, resembling the layout of a monastery. The cinema, the largest mass on site, is renovated into a museum, resembling the spiritual centre as a cathedral of a monastery.

The main building is located at the north side of the plateau, one storey lower than the central courtyard. The coffee storage space is located at the bottom level, and cross vaults create a cellar-like space shrouded in heaviness and dimness. Such heavy volume simultaneously responds to the physical requirement of a constant temperature and humidity. 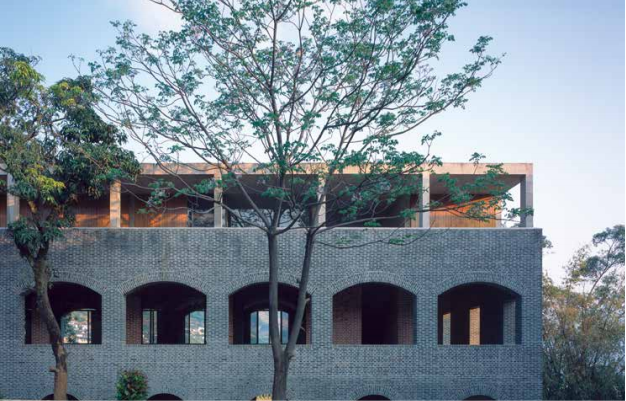 The coffee processing area is located at the mid-level and requires a large space for roasting and packaging. It combines long-span steel beams and one-way brick vaults to obtain continuous open space, while bringing in views from the courtyards and the valley. Its side corridors allow visitors to walk around and do sightseeing.

On the top level, the concrete frame takes over the brick to achieve maximum transparency, meeting the programmatic needs of hotel rooms overlooking the valley. From the bottom to the top, there is also a gradual transition from heaviness to lightness, responding to the diverse needs of storage. 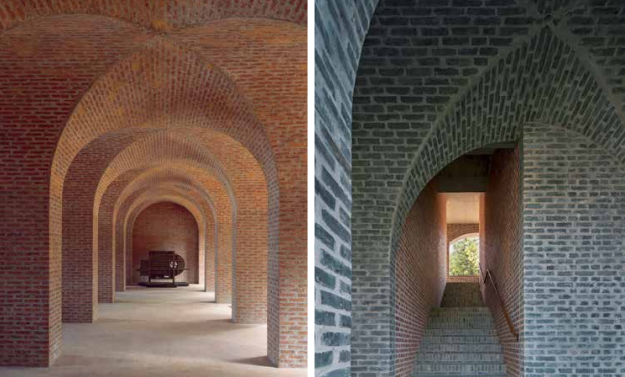 The building uses two types of materials, brick and concrete, which are consistent with materials commonly used in the local region, while also providing variation. Its spatial quality integrates the heaviness of brick construction and the lightness of concrete structure, resulting from a thorough consideration of material, structure, and program. The design begins with a perception of the site and reflections on the material. Its core is the main character of the space as it aims to create belonging to the earth while also leading far off towards the horizon. 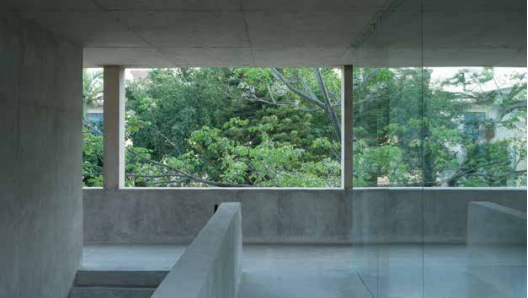 Born in China, in 1972, Hua Li received his B. Arch. from Tsinghua University in 1994. He then studied at Yale University and received his M. Arch. in 1999. He practiced in New York and Beijing before founding TAO (Trace Architecture Office) in 2009. Hua Li envisions architecture as an evolving organism, being an inseparable whole with its environment rather than just a formal object.

With most projects positioned in particular cultural and natural settings in China, his practice reflects the essence of place. The vision is to create architecture that is deeply rooted in its cultural and environmental context with awareness of site history, geography, and local condition. The sense of place, climate, topography, geology, local resource, and construction methods are all crucial factors taken into concern and explored in every TAO project. For this reason, Hua Li states, “In my opinion, the so-called thinking about ‘prototype architecture’ actually leads the design to the most graphic and basic understanding of architecture. It goes back to the basic relationship between the project and the site. 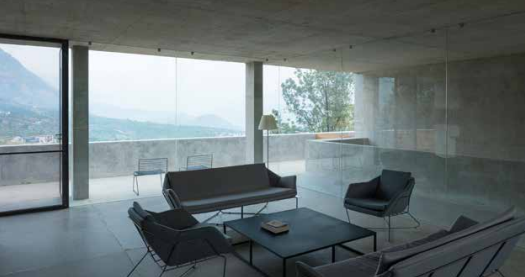 About Designer
TAO (Trace Architecture Office), one of the most active and influential architectural firms in China’s contemporary architecture field, was founded by architect HUA Li In 2009. TAO’s works have been exhibited in Venice, Vienna, Berlin and New York, and have been widely published internationally.