Cafe HER For Contemporary Women

Congrats to New Champions of 2..

Five years of experience. Creation of the latte art bird. 103 Coffee Workshop. All of these key phrases describe to you the 2018 World Latte Art Champion, Irvine Quek Siew Lhek. For this young man, his encounter with latte art has made his dream come true. In the latte art circle, his appearance has brought unique creativity and will start a trend of young new talent. The world is paying attention to the young generation of baristas. They are the new idols, and Irvine is one of them.

Became a barista to afford a new cellphone; quits school for latte art

The most beautiful stories all have their origins. The story of Irvine’s encounter with latte art started when he was just fifteen years old. At that time, he was a part-time employee in a Malaysian milk tea chain shop. Only a single-group coffee machine in the shop contributed to all of the coffee orders, and Irvine had the chance to make one or two cups of coffee every day, gradually mastering the basic techniques of making coffee. He then transferred his love of painting to milk foam. “I was young and naughty at that time, and I once quit my job when I lost my temper.” Irvine told us.

However, in less than a year, when he had gone back to school, in order to afford a new cellphone, Irvine once again decided to find a part-time job. He met the previous boss of 103 Coffee Workshop who had converted it from a milk tea shop to a coffee house.

Irvine then officially became a barista. Half a year later, he resolutely quit high school and threw himself into latte art. Regarding this decision he had made 4 years ago, Irvine said, “I just wanted to participate in competitions to prove my ability.

The expression of latte art should be interactive. I need to know if my latte art conveys my inspiration clearly and makes customers happy.

A successful fanboy in the latte art circle

The journey into competition was not as smooth as Irvine once thought. The intangible stress of winning the recognition of the judges to get the prize made him nervous, and he easily made mistakes on stage even though he had prepared a lot before the competition. As a result, Irvine could not surpass Malaysian contests nor enter the world championship.

The opportunity came at the Ristr8to World Latte Art Battle in 2017, in Chiangmai. Once again Irvine made a big mistake on stage. He was frustrated and did not know what to do. At that time, Arnon Thitiprasert, the initiator of this competition, appeared. Irvine was a big fan of Arnon, and suddenly got more butterflies in his stomach than when he was on stage.

But the thought of losing the competition knocked the sense back into him, and Irvine eventually seized the opportunity to ask Arnon for competition tips. Although there was no doubt that Arnon was the best in Thailand latte art, he did not win his first world latte art champion until he had participated in competitions for three consecutive years. The consecutive competitions for years required Arnon to keep a positive attitude, which Irvine respected a lot. He was inspired by Arnon’s confidence during the conversation, and decided to express his own ideas and personality through his latte art work.

“When Arnon gave me the trophy, it was one of the happiest moments in my life!” Irvine smiled, “It seemed as if I inherited his trophy and title.” Irvine proudly told us that Arnon was his big brother now. No doubt he is a successful fanboy in the latte art circle. 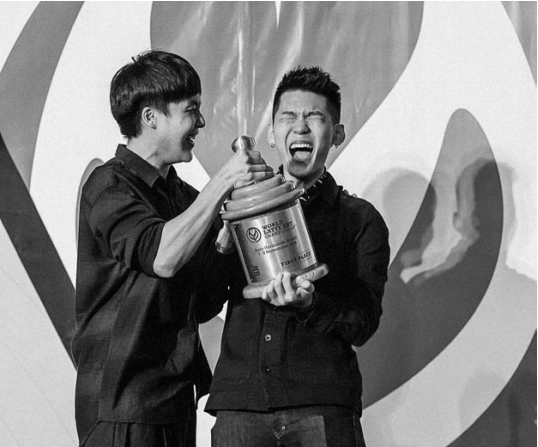 Five months have passed since the 2018 World Latte Art Championship, but Irvine still thinks of these three pieces of latte art work as his most satisfying productions. “In fact, I don’t create anything specifically for a competition. All of my inspiration comes from life,” he says.

Irvine grew up in Malaysia. The diverse tropical landscape has provided him with the opportunity to observe the migration of more than 600 different kinds of birds; among them there are some very rare migratory birds. When creating latte art, by nature, he chose birds as his signature pattern. In the World Latte Art Championship, Irvine turned the hornbill, the national bird of Malaysia, into a piece of work. He exhibited his latte art techniques through the unique appearance of the hornbill and impressed judges and coffee lovers from all over the world.

Another pattern of a monkey was designed by Irvine based on the rating scale. The combination of a lively facial expression and smooth leaves was easy to complete, but it also indicated the barista’s brilliant basic skills. As for the only chance to use the needle in the final, Irvine chose the pattern of a dolphin. He said a lot of visitors would go to Malaysia to see dolphins in the sea. The moment when dolphins jumped out of sea was seen as a sign of luck. In recent years, there were even pink dolphins that frequently visited Malaysian waters, which the whole world was crazy about. Irvin explained, “No one has ever tried this. That’s why I designed this pattern. I hope everyone who sees it will feel happy.

Before the World Latte Art Championship, he invited customers to see his pieces of work for the competition. “At first, they didn’t understand my pattern. They needed to guess what it was. I kept improving. In the end, they immediately got what I wanted to express.” Irvine laughed and told us about his “stubbornness”.

Even right before the 2018 Brazil World Latte Art Championship, Irvine was still open to any feedback. On the first day of the competition, during the thirty minutes of preparation, when many other baristas silently rehearsed in the corner, Irvine and his assistants directly opened the machine backstage. Surrounded by the crowd, Irvine never tried to hide his patterns for the competition.

“I spent nearly 10 months of intense training and spent more than 10 hours flying to Brazil. During that period, I expected the competition at every moment, ” Irvine’s voice very anxious before the competition. “I’m really looking forward to going onstage and presenting to everyone my delicate work of latte art.”Nowadays, he does not need to worry about trophies.

Competitions have become periodical quizzes to test the level of his techniques. When being asked which moment satisfies him the most, this young and confident boy says, “When customers love my latte art and enjoy the coffee.” 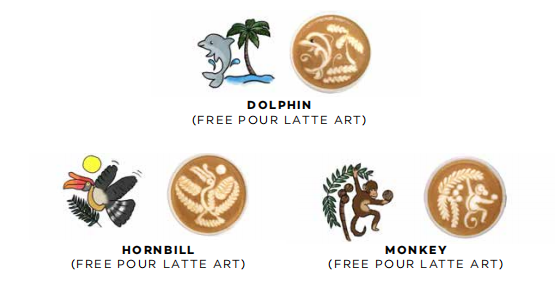 The responsibility of the young generation of baristas

In the 2018 Brazil World Championship, both Irvine and another Malaysian barista, Regine, entered the finals. That was the best record Malaysian coffee circle had ever made. In the end, Irvine successfully won the competition, and Regine ranked second. This good result was the icing on the cake, and it meant a lot to the Malaysian coffee circle. Irvine has always been seen as a junior due to his young age, but he owes the title of world champion to hard work and personal expression.

Irvine believes that age is not valid criteria to judge whether someone is successful or not. As long as they keep positive and work hard, any post-90s barista can achieve their goals in a relatively short time.

Irvine also hopes that the world-class prize can attract more Malaysians to pay attention to specialty coffee. This sense of responsibility is due to Malaysians’ habit of drinking white coffee. Because white coffee is cheap and its flavour is more approachable, most people over 25 years old will not choose specialty coffee. This problem of consumption habits is hard to solve. As the chief latte art master at 103 Coffee Workshop, Irvine regularly promotes specialty coffee among the mainstream, encourages them try specialty coffee as often as possible, cultivates the new trend of coffee consumption, and facilitates the healthy development of the Malaysian coffee circle.

After winning the World Latte Art Champion, Irvine went back to Malaysia and immediately threw himself into the creation of new patterns. By now he has successfully created fifteen new patterns. “Before this, I had to take the rating scale into consideration. As a result, I had to give up the impulse to try many new ideas.” Now Irvine is free to experiment with different creations and feels quite relieved.

This young man in his twenties who admired the World Champion now has many fans as well. His Instagram has more than 20k followers, and in the near future, Irvine will fly to different places to share his experience and to encourage his fans to keep advancing in the field of latte art and coffee. On the other hand, he expects to establish a latte art education institute starting in 103 Coffee Workshop and invites latte art lovers from all over the world to dig into latte art and make progress together.

As a hip-hop fan, Irvine also plans to set up his own fashion brand, as well as a customized milk jar, coffee ware, caps, and clothes. He will share his experience of latte art in Beijing and Shanghai separately in March and April of this year, and he will participate in Germany for the 2019 World Latte Art Championship in June as a coach. We are all looking forward to the surprises this 21- year-old will bring.