Although Italy is known for its strong love of coffee, it has never been considered a producing country. The first person to place a bet on coffee plant cultivation in Sicily and decided to begin growing them was Giovanni Balistrieri. Nowadays, he’s 78 years old and the young generation continues to carry on what he started. Adriano Cafiso is a part of this generation. He began with an academic research on the life cycle of coffee, and then he came across the possibility of working as a coffee buyer for an Italian roastery. This allowed him to get to know and to live in countries where coffee was produced. He spent most of his life in various farms during the harvest and processing period, trying to help the farmers with their production.

In Sicily, he and his neighbor Giovanni Balistrieri, they manage La Finca Balistrieri, the oldest coffee plantation in Italy, based in Santa Croce Camerina, in Ragusa, Sicily. Santa Croce Camerina is located in eastern Sicily and the average annual temperature here is 22 degrees Celsius and there is about 262 mm of rain in a year. It is about an acre long and planted with coffee and tropical fruits such as papaya and pitaya as well as oranges, mulberries, pistachios and olives. There are about 150 coffee trees, 90 of which are 4-11 years old and more than 60 of which are 17 years old. The coffee plants continued to grow without producing any notable harvest for over 17 years until May 2022, when for the first time, around 10 kg of coffee cherries were harvested. “Our coffee ended up having orange, almond and carob notes and a soft body,” Adriano told us.

When Adriano Cafiso with his neighbor Giovanni Balistrieri started planting coffee in La Finca Balistrieri, it was mainly because the soil was deteriorating, even though Ragusa Province is one of the biggest producers of greenhouse produce. By planting some tropical trees, they saw improvements and a regeneration of the soil vitality that Adriano considered to be the key to their experiment.

“Papaya, avocado, pitaya and mango are the fruits that are grown near to the coffee trees. In this case, it’s a symbiosis situation—these fruits will enhance the outcome of the coffee cherries. For example, the avocado tree supplies the soil with nitrogen, helping the coffee. Each tropical fruit mentioned will change the results in a specific way, this is still an on-going research process,” Adriano said.

Pests and diseases can ruin coffee crops. They’re trying their best to work only with organic fertilizers and beneficial insects. They also have beekeeping near the coffee plantation, which helps the place maintain a sustainable ecosystem.

When talking about sustainability, Adriano is very concerned about the coffee in Ethiopia where it is considered to be the birthplace of coffee. “Ethiopian coffee remains the type of coffee that requires more protection in the whole African continent. Currently there are hundreds of Arabica varieties in Ethiopia that are going through an on-going individuating process. To accomplish that we’ll need to put an environmental protection policy in place and reshape the washing processes that are still too traditional and harmful to the environment. In Ethiopia, coffee is grown by many small producers and the on-going war from the last two years made it hard for the country to develop. How could we leave such a unique coffee behind?” Maybe the experience of coffee growing in Sicily can give some inspiration to Ethiopia. This is what a new origin can offer to a traditional one. Italians’ passion for coffee is written in their DNA. As a developed country, it’s common for coffee professionals to take professional coffee related classes, like Q Grader courses, barista courses, roasting courses and so on, but the chances to get the knowledge in coffee farming and coffee processing are limited. “They don’t know how coffee arrives from the other side of the world to their local cafe. Teaching the public more about coffee is important to change the way everyone buys and drinks coffee,” Adriano said.

So, he opens the plantation to the public to teach and explain to them how coffee is grown. To celebrate this year’s harvest, Adriano and his friend held the first class in Italy on coffee harvest and post-harvest process. What is of interest is that according to the data released by Statista Research Department in 2021, in Italy, the Southern regions record the highest share of people who are unemployed and not receiving an education or vocational training. In Sicily, 39.3 percent of females and 35.8 percent males aged 15 to 29 years are neither working nor studying.

In this context, this makes coffee education particularly important in Sicily. More and more educational programs are being carried out here in recent years.

We noticed that a new coffee related project to fight educational poverty has opened in Sicily this year. Paspartù, a recreat ional space for minors, opened in the historic center of the town of Acate, with two game rooms, a coffee area, a computer room offering digitization courses and another room for conferences and theater classes. The project’s mission is to contrast educational poverty in a geographic area characterized by the presence of greenhouses employing migrant agricultural laborers. Migrants make up a large part of Italian farmers. According to the Italian farmers association CIA-Agricoltori Italiani, as of the end of 2020, there were 357,768 workers in Italian fields that had been born abroad out of 900,000 total, accounting for 29.3% of the overall employment in terms of days worked.

Sicily is also called the Land of Oranges (or sometimes Land of Lemons) as it produces abundance of lemons and oranges every year.

Sicily’s climate is typically Mediterranean, dry in the summer and mild in the winter. It rains mainly in autumn and spring, and in summer temperatures reaching 35/40 degrees CelsiusC can be experienced. However, because of the presence of mountains, the climate can vary based on the altitude and the exposure to the dominant winds. Such climate change leads to a drop in Sicilian production of traditional fruits, like oranges, which has pushed local farmers to look for alternative veggies to grow, including coffee. According to the Italian farmers’ association Coldiretti, there are currently 1,000 hectares of exotic fruit estates in Italy. The number has tripled in the last few years. And the great news is that Italians are eating more and more of their own exotic fruits with an annual consumption of 900,000 tonnes.

“Tropical fruit plantations began showing up long ago. Over here we see plants such as moringa or maracuja that won’t grow that easily in other regions of Italy. Regarding the horticulture they need, just like coffee, less water irrigation as well as the advantage of not using insecticides and pesticides like in regular horticulture,” Adriano said.

However, the climate crisis is transforming the environment in the Mediterranean more quickly than in other parts of the world, and the rate of temperature increase in the area is 20% higher than the rest of the planet.

Last summer, Sicily saw the highest temperature ever recorded in Europe: 48.8 degrees CelsiusC in the town of Syracuse, 0.8 degrees CelsiusC higher than the previous European record. Although it was a hard year for many traditional crops, Sicily saw its first coffee harvest with 30 kilos of coffee cherries. It was produced by the Morettino family who had been trying to produce their own coffee on a small piece of land in Sicily’s western side for 30 years.

Regarding coffee, although Sicily is experiencing climate change, what hasn’t changed is a warm, dry climate that helps keep disease at a minimum and mineral-rich dark soils that enhance the quality of the fruits. In addition, the eastern part of Sicily has historically been a very fertile area. Thanks to the volcano Etna, the soil is full of nutrients and minerals, and this is exactly what coffee growing needs.

Will Coffee Share the Same Fate With Wine Here?

With its nearly 250,000 acres of vineyard area, Sicily is among the top three largest wine-growing regions in Italy.

The Sicilians have been making wine since 4000 B.C. Their dry, warm climate is characterized by regular sunshine and moderate rainfall, which is suitable for wine production. The dry conditions reduce the chances of rot and mold, especially in areas kissed by coastal winds. This makes Sicily a prime candidate for organic farming. Olives, citrus and grains drive the agricultural sector beyond wine.

According to world’s leading wine media brand Decanter, 30% of the vineyard area in Sicily is cultivated organically and another 20% has integrated pest management, making a total of 50%.

“The wine industry changed a lot in the last few years We’ve seen, for instance, the natural wine trend going around a lot in our region. Producers began paying more attention to the cultivation process and producing and bottling organic and natural wines. The same trend could happen with coffee regarding the Italian market. More people start paying attention and changing their behavior,” Adriano said.

It’s still too early to determine the impact of this new origin for the coffee industry, “The advantage is that we have the resources to do more research, like the research on genetics and coffee varieties and especially researching and fighting the diseases that, as we know, is the main problem in tropical countries. The only downside is the required attention and time dedicated to developing such research,” Adriano noted. 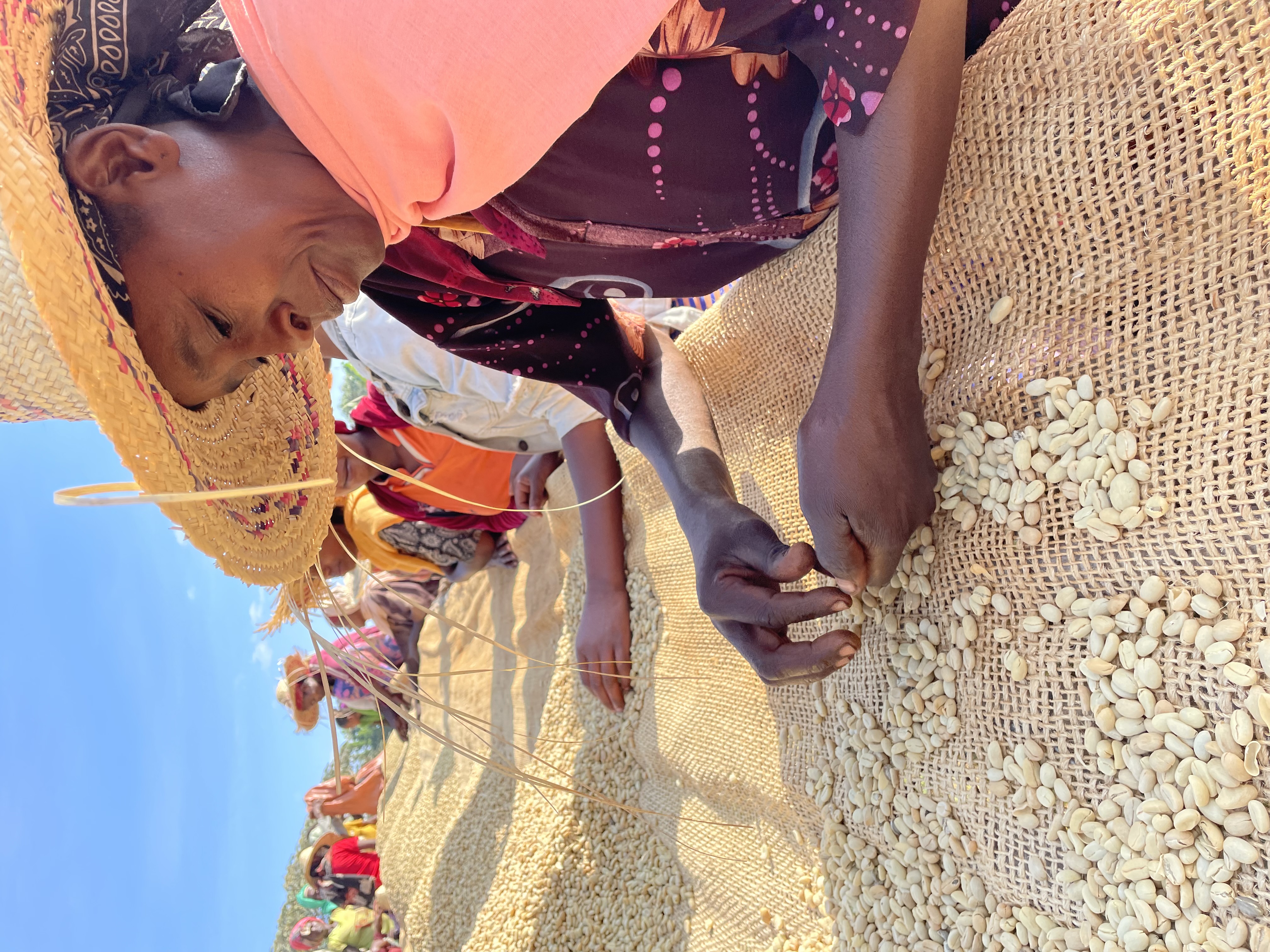 Adriano believes each origin, and more than that, each farm plantation, could be different and special in some way, depending on the farmers’ goal and the depth of knowledge of its consultants. Choosing the right variety or species, improving processing in terms of control of variables and hygiene, managing the environment with other cultivations, and using organic nutrients are the keys to produce a different and high-quality coffee.

“Farmers will be the main character of the fourth wave in the coffee industry.” Adriano added, “Coffee practices in developed countries also have great potential to promote fair wages for farmers.”

Besides the experimental plantation in Italy, Adriano is putting most of his efforts in Ethiopia, India, Nepal and Peru. He pointed out that India is the country that in the last years has made gigantic progress on handling coffee and that from an agronomic point of view they’re among the best producers. Nowadays it’s truly hard finding coffee trees in India without shadow or in single origin. The cultivation inside a forest system allows so many advantages, such as keeping the biodiversity, the possibility of cultivating other products (fruits, spices, and legumes) in the same space, an essential fight against climate change and the atmospheric adversities and the significant reduction of fertilizers. India could truly be a model to be followed by other countries.

With the coffee growing experience acquired in various countries by Adriano, we can expect more stories about coffee from his plantation, La Finca Balistrieri. Also, Adriano told us that there are at least four on-going experiments in Sicily regarding coffee. It is located on all sides of the country with different climates, for example, coffee was also harvested in Sicily’s western side last year. We can definitely expect more coffee stories from Sicily.