Which Decaf Process Would You Choose？

Which Decaf Process Would You Choose？

While most of the people on Earth look for their caffeine fix on a cup of coffee in the morning, there is also a large population, about 12 percent, that cannot stand the jittery effects that the caffeine may cause and that is why we got decaf coffee.

People who are sensitive to caffeine can feel the effects with even 10 milligrams and the average six-ounce cup of coffee typically contains approximately 50 to 75 milligrams of caffeine. This depends on the method used for the preparation and the variety, since there are some Arabica varietals that contain very few caffeine, such as Laurina, whereas Robusta contains twice as much caffeine as Arabica.

The process discovered in the 1900’s by Ludwig Roselius, has undergone multiple changes since it was first done using benzene, a substance known to be carcinogen. Nowadays we can find five different procedures to extract caffeine, but this doesn’t mean that it will be caffeine. The average amount of caffeine extracted is 97% but this will depend on the decaffeination process.

You might have heard about naturally decaffeinated, but let’s start by saying that the decaf process is not natural, it just uses solvents found in some ripe fruits making it safer when it comes to chemicals. So now let’s dive into these processes.

If you are into specialty coffee you might have already heard about the Swiss Water process since their philosophy is: “a passion for crafting amazing decaffeinated coffee.”

How does this work? This process is completely chemical free and uses pure water to gently remove the caffeine with the promise to keep the best flavors in it. They do this by soaking the green beans in their own developed Green Coffee Extract (GCE), which they continuously monitor during 10 hours. The soluble compounds of the GCE and the compounds in the coffee should reach the point of equilibrium after 8 or 10 hours. Then caffeine and the GCE flow through carbon filters removing 99.9% of the coffee’s caffeine.

The GCE is balanced to extract mainly the caffeine which allows the coffee’s best characteristic to remain in the bean. This process is certified organic by OCIA and Aurora Certified Organic. Also they are certified kosher by the Kosher Overseers Association. 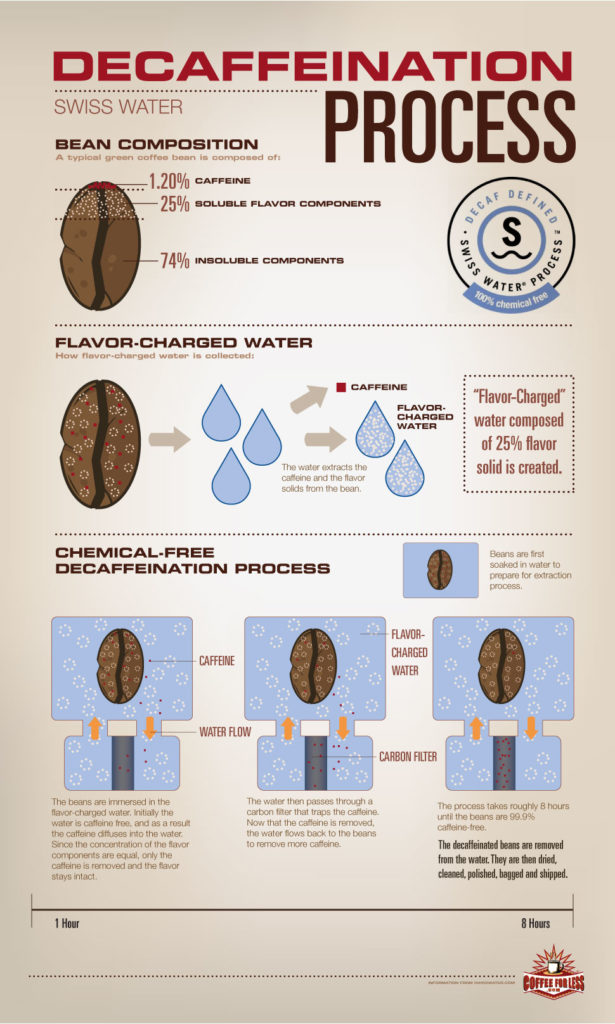 Water is the universal solvent, therefore it is used to dissolve caffeine from the bean. During this process the beans are soaked in very hot water, near boiling point, which is then separated and transferred to another tank. Here the chemical solvent is added to the water which selectively bond with the caffeine. This is then heated to remove the chemicals and the caffeine from the water which is afterwards added back to the bean. As a result, coffee oils and flavors are reabsorbed.

Since the solvent doesn’t make direct contact with the coffee you can guess the reason behind the name. A common question about decaf coffee is: “Is it safe?” This comes up due to the fact that through history, some harmful chemicals such as benzene, trichloroethylene, and chloroform were used. Today the chemicals of choice are methylene chloride and ethyl acetate, even though they are still chemicals, they are found to be safe and the remaining solvent in the coffee beans most likely will not survive the roasting process due to the high temperatures.

Now that we have learned about the indirect process, it’s easy to know what the direct solvent process is about. The first step always begins with opening the pores to extract the caffeine, this time by steaming the beans for about 30 minutes.  After that, the solvent is directly added to the beans and rinsed for about 10 hours. The beans will be steamed again to remove any residual chemical.

Both the direct and indirect solvent process can be found under the name “Natural Decaffeination Process” but if the solvent used is ethyl acetate and it was synthetically produced instead of being found on ripe fruits, there is not much of the natural left.

This process is considered to be organic since it uses carbon dioxide as a solvent, which even if synthetically produced is considered an organic gas. In this process, water soaked beans are placed in extraction vessels made of stainless steel that can resist very high pressure. The extractor is then sealed and CO2 is introduced at pressures of 1,000 pounds per square inch to extract the caffeine, at this pressure CO2 turns into liquid. The CO2 that acts like a solvent removes not only the caffeine but the large flavor molecules as well, which is then transferred to the absorption chamber, the pressure is released and the CO2 returns to the gaseous state. The caffeine free CO2 will then be recycled and the process will start again. This process is mainly used for commercial coffees due to its high cost.

Last but not least, during this process, after the beans have been soaked in hot water they are transferred to another container and immersed in coffee oils that were obtained from spent coffee grounds. This is heated during several hours at a high temperature and the coffee oils that contain triglycerides will separate the caffeine but apparently doesn’t sacrifice the flavor. This is the most recent procedure to remove caffeine. 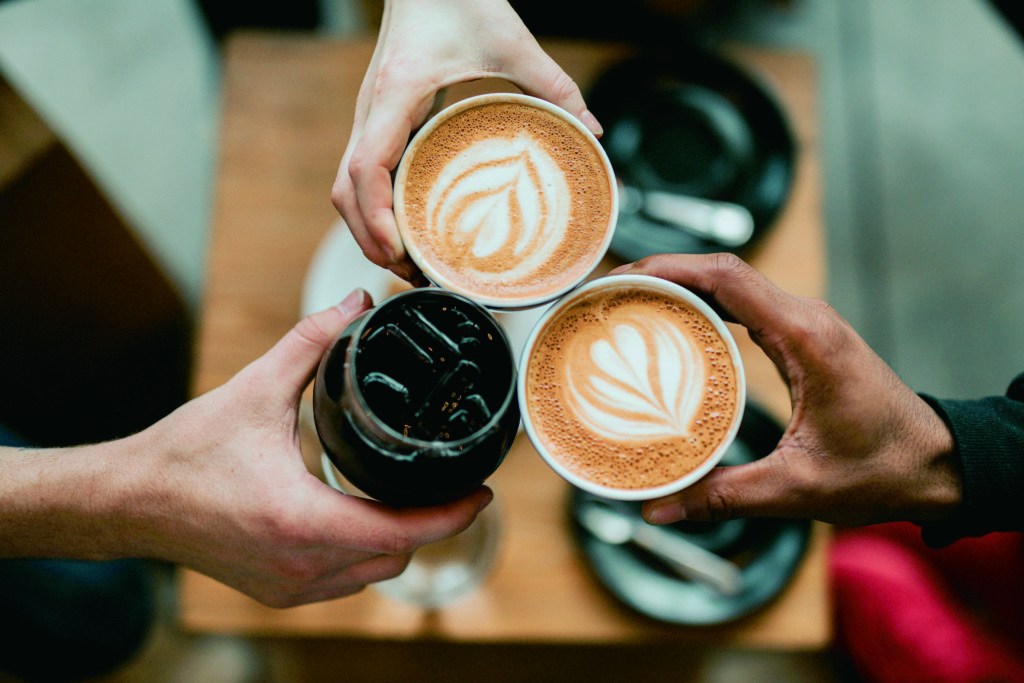 By now you should have questioned yourself about the flavor’s quality since all the processes involve soaking the beans in water or opening their pores. Yes, the flavor will be different but depending on the process, most flavor components will remain in the final cup.

The roasting process is also important to take into account since decaf coffee will be brown rather than green after the decaffeination process and their moisture levels tend to be lower. This means that recognizing the roast level by sight will be difficult from the beginning and since it has a lower moisture content it will roast faster. If you really need that decaf specialty cup of Joe make sure you are getting it from a skilled roaster. So which decaf process would you choose?